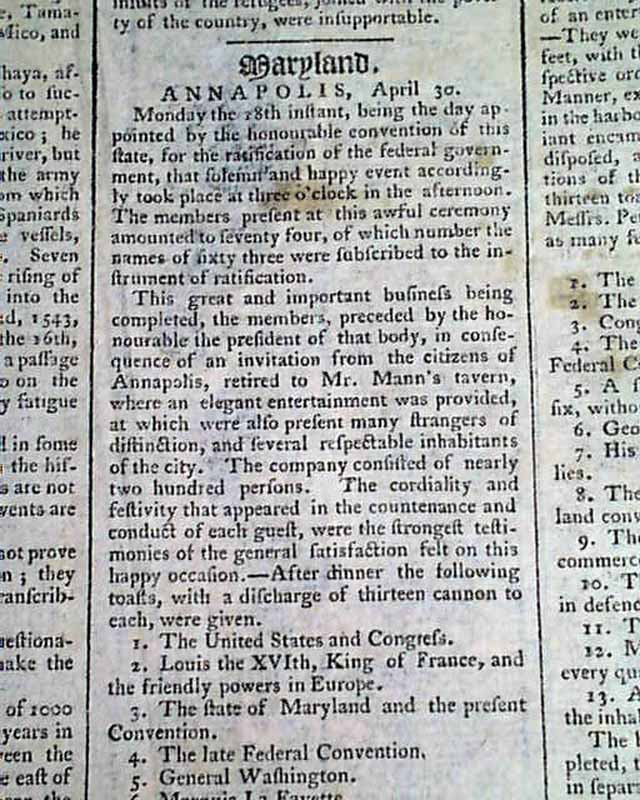 
THOMAS'S MASSACHUSETTS SPY OR THE WORCESTER GAZETTE, May 29, 1788

Of the 8 inside page columns nearly half of them are taken up with the announcement & celebration of the federal Constitution by Maryland. A report datelined from Annapolis has near the beginning: "....the day appointed by the honourable convention of this state for the ratification of the federal government...took place at three o'clock..." with much on the celebration, including the list of 13 toasts.
This is followed by: "RATIFICATION of the Ne Proposed CONSTITUTION by the State of MARYLAND" with the formal announcement dated April 28, 1788.
There is a report from Baltimore beginning: "As soon as it was known in town that the Constitution for the United States of America was ratified, & our Convention dissolved, the joy of the people was extreme..." with much more.
This also is followed by 13 "Toasts" and then the very lengthy: "Order Of Procession" for the celebratory parade.
Four pages, a library stamp in an upper corner, a bit irregular at the blank spine not affecting any text, a bit of foxing & light staining.