Home > Back to Search Results > Editor expresses his anger against the Yankees...
Click image to enlarge 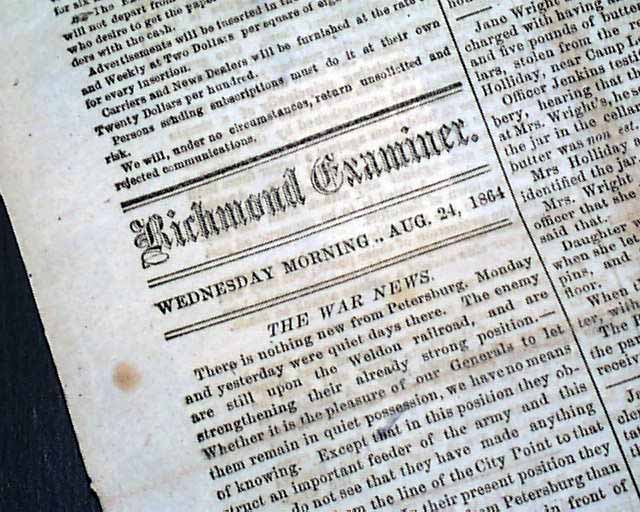 Editor expresses his anger against the Yankees...

The front page has: "The War News" beginning: "There is nothing new from Petersburg...The enemy are still upon the Weldon railroad...The battle of last Sunday was not half the battle we at one time thought it...". Also: "The Situation at Mobile" with subheads: "A Naval Skirmish" and "Fort Morgan". Also: "From Georgia" which begins: "There was heavy artillery firing on the centre last night..." and much more. There is also: "From Petersburg" and a: "List of Casualties" from the fight near Petersburg.
The back page has the always interesting and vitriolic editorial, taking two columns, with one bit noting: "...Every good man was gratified lately on reading that a Yankee who had gone to Louisiana and taken possession of another man's sugar plantation by authority of his government, had been brought back to New York a corpse, together with his family of five, corpses too. So perish all invading thieves!..." and "...Considerable numbers of deserters from Grant's army are said to have already come across within our lines..." and ending with: "...no recruiting agent of a Yankee state should be detected skulking about towns or plantations without being promptly tied up to the nearest tree." and much more.
Also on the back page: "Additional From the North" with subheads: "Operations Before Atlanta--Wheeler's Attack On Dalton" "Meeting at Fort Wayne--Strong Peace Resolutions in Indians" "Lincoln's 'Peace-Makers' In Richmond--Their Hobnobbing with Secretary Benjamin for an Interview with President Davis..." with more. Also: "Grant's Position from an English Stand Point--The Late Movements In Virginia".
Complete as a single sheet newspaper with a single column masthead, typical for Confederate newspapers in the latter months of the war due to paper shortage. Some paper weakness causes small holes near the bottom but causing no loss of readability, otherwise in great condition.