Home > Back to Search Results > Battle of Brownstown and the surrender of Detroit...
Click image to enlarge 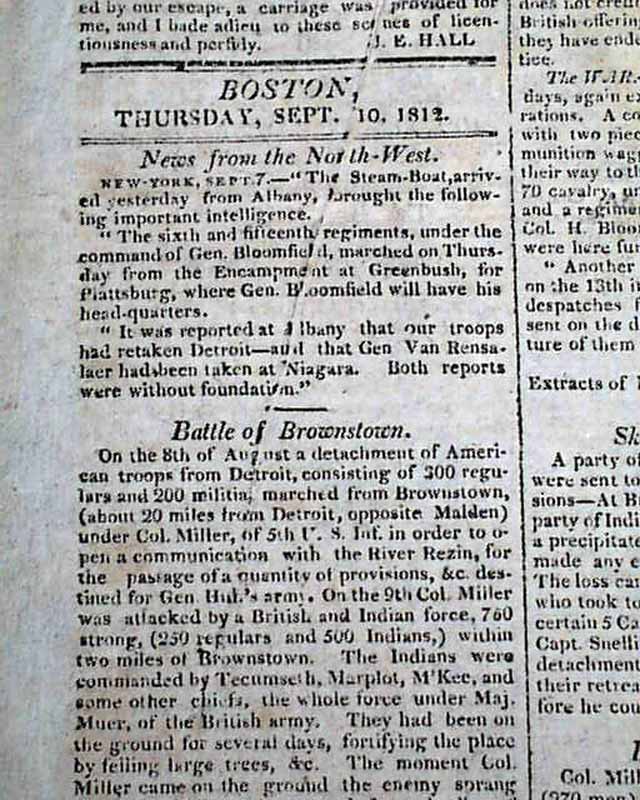 Battle of Brownstown and the surrender of Detroit...

Page 2 has some truly great content on the War of 1812 beginning with the: "Battle of Brownstown", an American defeat inn which: "...But the American troops did not disgrace themselves or their country. They dealt out a full measure of death to the sanguinary wretches--they drove them, inch by inch, to the village of Brownstown...".
Also a report: "From Pittsburg" concerning the surrender of Detroit by General Hull, with detail. Then: "The Canandagua Paper of Sept. 1 Contains the following Intelligence form the North Western Frontier" with more on Gen. Hull.
Also: "Skirmish at Brownstown" "Battle Near Brownstown", letters from Cincinnati and from Fort Wayne; "Gen. Hull's Army" "Capture of Gen. Hull" "The North Western Expedition" "The Indians" "Captain Hull" with more.
Four pages, nice condition.