Home > Back to Search Results > The very beginning of the Financial Panic of 1873...
Click image to enlarge 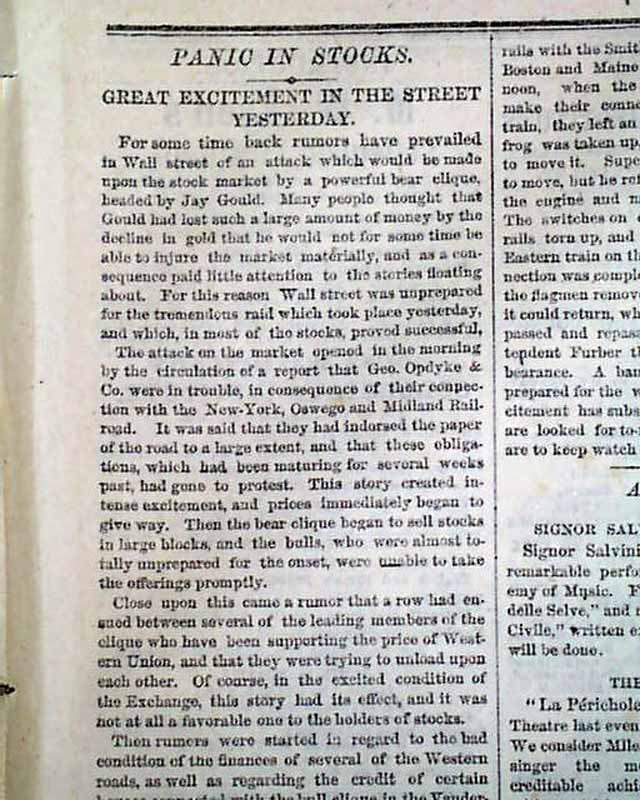 The very beginning of the Financial Panic of 1873...


THE NEW YORK TIMES, Sept. 18, 1873. This issue has fine early coverage on what became known as the "Panic of 1873" - which was precipitated by the bankruptcy of the banking firm of Jay Cooke and Company.
There is an article on pg. five, "PANIC IN STOCKS - GREAT EXCITEMENT IN THE STREET YESTERDAY", which takes nearly a full column of text. Another somewhat related article appears on page eight: "RODMAN AND SPRAGUE", with subhead: "LATEST DEVELOPMENTS - THE TRUST COMPANY'S LOANS", which is approx. 2/3 of a column in length. See photos for details.
Complete in 8 pages, although pulpish, is relatively nice condition.

BACKGROUND: The failure of the Jay Cooke bank, followed quickly by that of Henry Clews, set off a chain reaction of bank failures and temporarily closed the New York stock market. Factories began to lay off workers as the United States slipped into depression. The effects of the panic were quickly felt in New York, more slowly in Chicago, Virginia City and San Francisco. The New York Stock Exchange closed for ten days starting September 20. Of the country's 364 railroads, 89 went bankrupt. A total of 18,000 businesses failed between 1873 and 1875. Unemployment reached 14% by 1876, during a time which became known as the Long Depression. Construction work lagged, wages were cut, real estate values fell and corporate profits vanished.
This is the first report, as Jay Cooke & Co. went bankrupt on September 18. An extremely significant newspaper in U.S. financial history.