Home > Back to Search Results > Curious little newspaper calling itself "The Smallest Newspaper in the World"...
Click image to enlarge 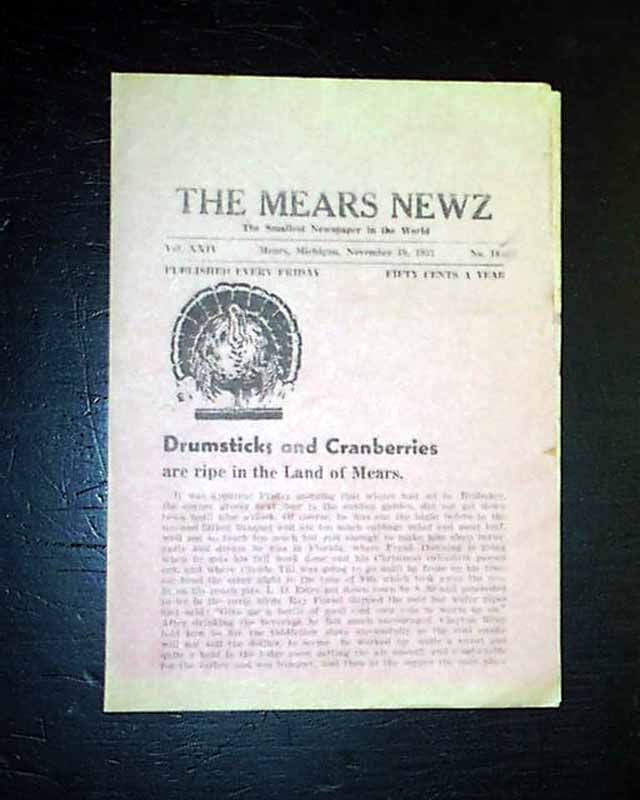 Curious little newspaper calling itself "The Smallest Newspaper in the World"...


THE MEARS NEWZ, Mears, Michigan, Nov. 19, 1937  This is a fascinating little newspaper which dubbed itself as: "The Smallest Newspaper in the World" as noted in the masthead. Created by one of the more interesting publishers in Michigan history, Swift Lathers, this weekly was just 4 pages & measured 5 1/4 by 7 1/4 inches.
It was usually hand delivered to subscribers, was filled with all sorts of brief descriptions of home life & other tidbits from throughout Oceana County. Mears was, and still is, a very small community at the western edge of Michigan.
Despite the rustic nature of his approach to the news, Lathers was not afraid to editorially attack any issue or person who did not measure up to his standards of morality, which resulted in numerous legal battles & earned him many enemies. He began the newspaper in 1914 with 300 subscribers which grew to nearly 3000, at which point he voluntarily cut the list in half--literally--with a pair of scissors put to both ends. Those whose name began with a letter up to "D" or after "S" stopped getting the Mears Newz.
Very nice condition and printed on pink newsprint.