Home > Back to Search Results > Concerning the surrender of Burgoyne at Saratoga...
Click image to enlarge 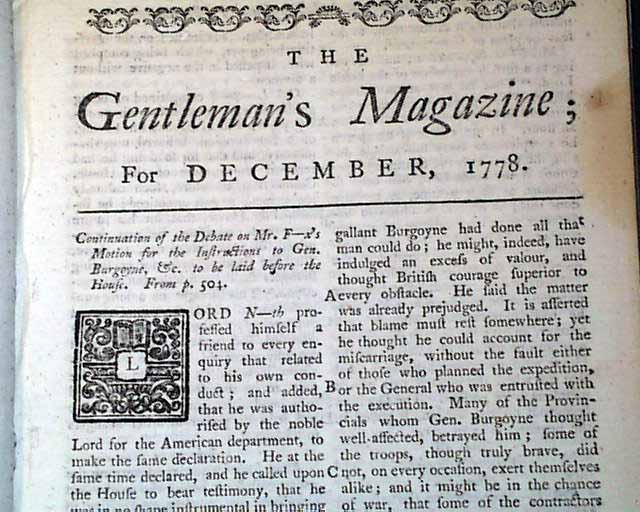 Concerning the surrender of Burgoyne at Saratoga...

The first article, taking fully six pages, is debate on the: "...motion for the Instructions to Gen. Burgoyne..." , obviously relating to his defeat at Saratoga, with some reports including: "...convinced that the gallant Burgoyne had done all that man could do...Many of the Provincials whom Gen. Burgoyne thought well-affected betrayed him; some of the troops, though truly brave, did not, on every occasion, exert themselves alike..." with much more, and evolving into other issues on the war. Another page notes: "...the various operations of the army in America after the arrival of the troops--their being cooped up in Boston, to their being obliged ultimately to leave it...What, says he, was the language of America at this time? They send a petition to this country...disclaiming every idea of independence...the ministry gave out, the petition was all a farce, the Americans want independence...".
Near the back are four pages of reports headed: "Advices Received from America" including a nice letter regarding a desire to have the convention of Saratoga fulfilled, that: "...the troops detained in New England in direct contravention of the treaty entered into at Saratoga...I now, however, repeat the demand that the convention of Saratoga be fulfilled..." signed: H. Clinton. This is responded to a terse terms: "...directed to inform you that the Congress of the United States of America make no answer to insolent letters."
Also mention of Cornwallis taking a post on the Hackensack River; some talk of Gen. Washington with: "Gen. Washington did not seem to shew the least disposition to assemble his army & the militia kept at a distance..." with much more on events in upstate New York & elsewhere, mentioning Tappan, New York, Little Egg Harbour, & more.
Lacking the plate called for.
Complete in 48 pages, full title/contents page with an engraving of St. John's Gate, 5 by 8 1/4 inches, minor loss to a corner of the back leaf, nice condition.