Home > Back to Search Results > A print of Ben Franklin's puzzle...
Click image to enlarge 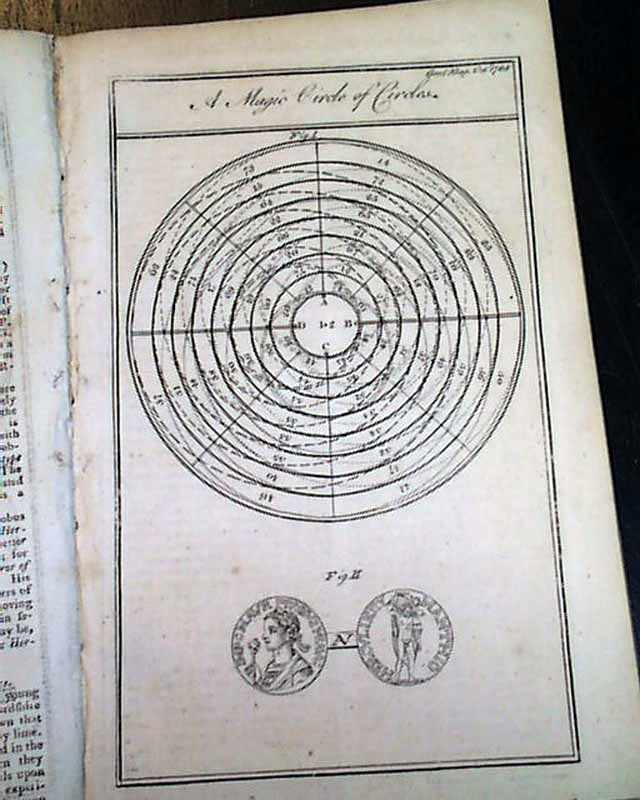 A print of Ben Franklin's puzzle...

Item # 672460 THE GENTLEMAN'S MAGAZINE, London, England, October, 1768  The prime piece in this issue is the full page plate titled "A Magic Circle of Circles" as well as the related article titled "Dr. Franklin's Magic Circle of Circles" which takes two-thirds of a page. Benjamin Franklin is credited with creating this interesting "puzzle". A very nice & early item on Ben Franklin with a rare appearance of the actual puzzle, often missing from this magazine.
Also in this issue are over two pages of great content concerning the growing troubles between England & the American colonies over the issue of taxation. Included is the full text of the Boston Non-Importation Agreement done on August 1, 1768 which includes the 5 points of the agreement. This is preceded by a letter of plea: "To his Most Excellent Majesty" by the House of Representatives of Massachusetts asking in part for the removal of Governor Francis Bernard.
There is a curious full page of diagrams of the: "Types & Calculations of the Transit of Venus & the Eclipses of the Sun & moon in 1769". Also: "A Remarkable Account of a Converted Jew", and much more.
Near the back is "Plantation News" which includes news from Boston.
Included are two plates, being the "Magic Circle of Circles" noted above, as well as another which is actually called for in the November issue.
Complete in 48 pages with a full title/contents page featuring an engraving of St. John's Gate, 5 1/4 by 8 inches, very nice, clean condition.

A very nice magazine from the "mother country" not long before the outbreak of the Revolutionary War, with a wide range of varied content. This was the first periodical to use the word "magazine" in its title, having begun in 1731 and lasting until 1907.