Home > Back to Search Results > Death of Florenz Ziegfeld...
Click image to enlarge 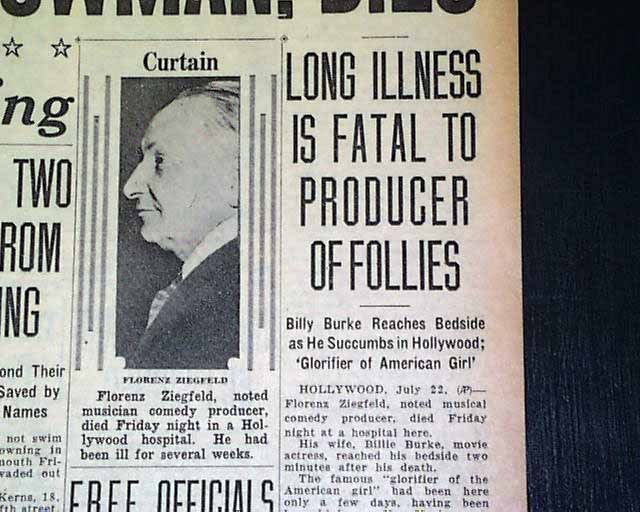 This 24 page newspaper has a nice 7 column headlines on the front page: "FLO ZIEGFELD, FAMED SHOWMAN, DIES" with subheads. Other news, sports and advertisements of the day. Good condition.

source: wikipedia: Florenz Ziegfeld Jr. (March 21, 1867 – July 22, 1932), called Flo Ziegfeld, was an American Broadway impresario. He is best known for his series of theatrical revues, the Ziegfeld Follies (1907-1931), inspired by the Folies Bergères of Paris.

Ziegfeld's first foray into the world of entertainment was at the 1893 Chicago World's Columbian Exposition, where he managed the famous strongman, Eugen Sandow.

His stage spectaculars, beginning with Follies of 1907, were produced annually until 1931. These extravaganzas, with elaborate costumes and sets, featured a bevy of beauties chosen personally by Ziegfeld in production numbers choregraphed to the works of such prominent composers as Irving Berlin, George Gershwin and Jerome Kern.

His promotion of the Polish-French Anna Held, including press releases about her milk baths, brought her fame and set a pattern of star-making through publicity. Ziegfeld helped oversee her meteoric rise to national fame. It was Held who first suggested an American imitation of the Parisian Follies to Ziegfeld. [1]. Ziegfeld never married Held, but they maintained a common-law relationship, outrageously scandalous in that day and age, which ended in 1913, allegedly solely because he moved his mistress into an apartment one floor up from theirs. Ziegfeld married Billie Burke in 1914, and they had a daughter, Patricia.