Home > Back to Search Results > Battle of Fredericksburg...
Click image to enlarge 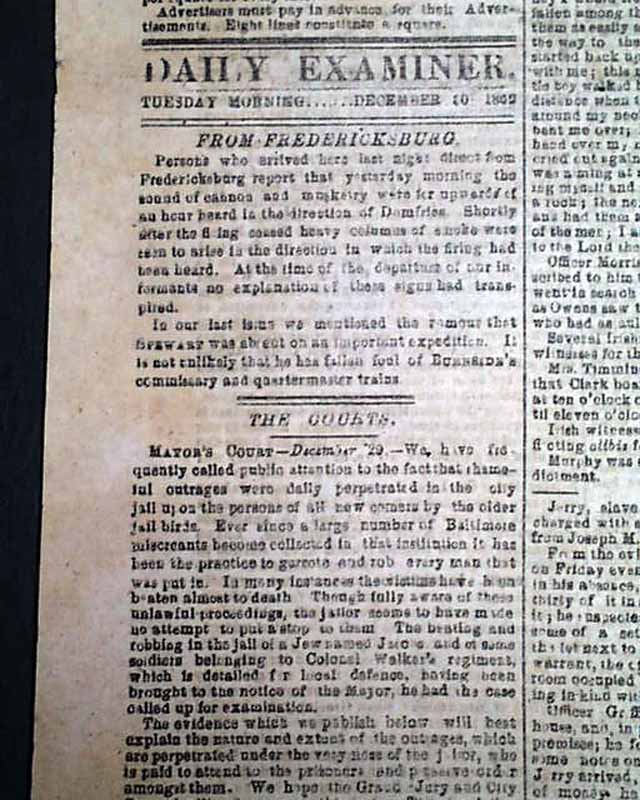 The front page has a wealth of war-related news including items headed: "From Fredericksburg" "City Intelligence" "Communication with the North" "Forestalling and Corrupting Negro Labour" "The War In The Southwest" "The Ball Opened in the Southwest--A Battle Impending at Murfreesboro--Capture of Glasgow by Morgan--The Two Armies in Line of Battle" "From the North" "Later From Fredericksburg" "Movement Against Vicksburg--Advance & Repulse of the Enemy" "Van Dorn's Recent Exploits--Memphis Not Attacked" & other smaller items.
The back page is dominated by the lengthy editorial, always interesting reading in this title. One bit begins: "Few things are more desirable than a Confederate victory in the West. Since the beginning of the war the successes of the Southern standard in that quarter have been doubtful, while its defeats have been decided..." with much, much more.
The bkpg. also has: "Additional From The North" which has many subheads including: "Official History of the Battle of Fredericksburg--Report of the Congressional Committee Appointed to Investigate the Facts--Deposition of General Burnside..." and more.
Complete as a single sheet newspaper with a full banner masthead. Some wear at the margins, generally in nice condition.