Home > Back to Search Results > British Jew Bill... Engraving of a church in Charleston...
Click image to enlarge 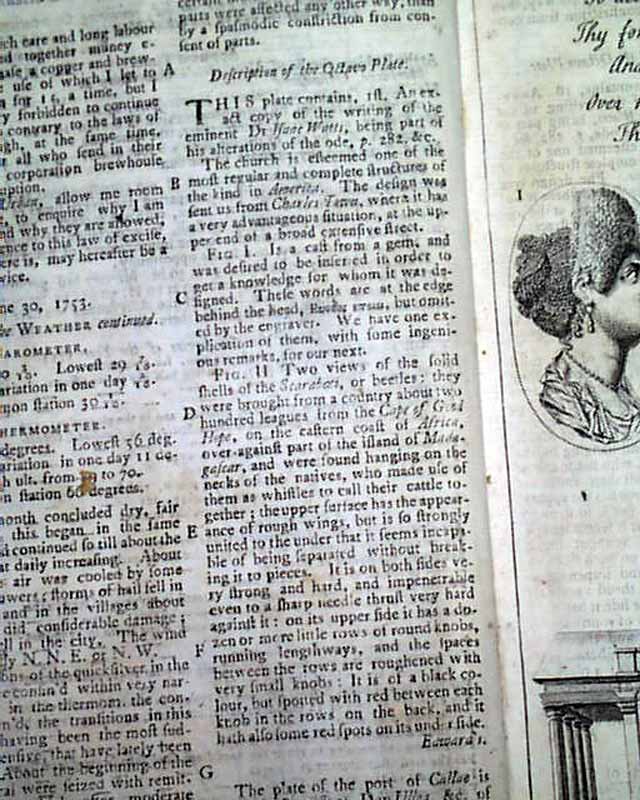 British Jew Bill... Engraving of a church in Charleston...

Item # 672418
THE GENTLEMAN'S MAGAZINE, London, June, 1753  This issue contains a great full page print of: "St. Philip's Church in Charles Town, South Carolina" with just a small bit of text on it on the facing page reading: "The church is esteemed one of the most regular & complete structures of the kind in America. The design was sent us from Charles-Town [Charleston] where it has a very advantageous situation at the upper end of a broad extensive street.".
This historic church was the second rendition built on the site and it was destroyed by fire in 1835. The present iconic church which exists today was built in 1836.
Quite rare to find prints of American architecture in this magazine.
Another feature article in this issue is: "The Bill Permitting the Jews to be Naturalized by Parliament..." which was a significant event in Judaica history and takes over a full page of text (see for portions).
There is also a full page taken up with text and an engraving headed: "View and Description of the Island of Capri". The text is presented vertically  (unusual format) and is very descriptive of this famous island in the Naples harbor in Italy.
Also: "Geographical Description of Louisiana" which begins: "Louisiana is a country in North America bounded on the south by the gulph of Mexico, on the east by Carolina, an English colony, and part of Canada; and on the west by New Mexico, on the north, part of it is bounded by Canada..." with much more. The text is extremely descriptive and takes close to three pages (photos show portions).

There are a couple of news items in the "Historical Chronicle" under the heading: "Plantations" with datelines of New York, Kingston, Jamaica; and Barbadoes.
Lacking the map and bird print called for.
Complete in 48 pages, 5 by 8 inches, full title/contents page featuring an engraving, great condition.