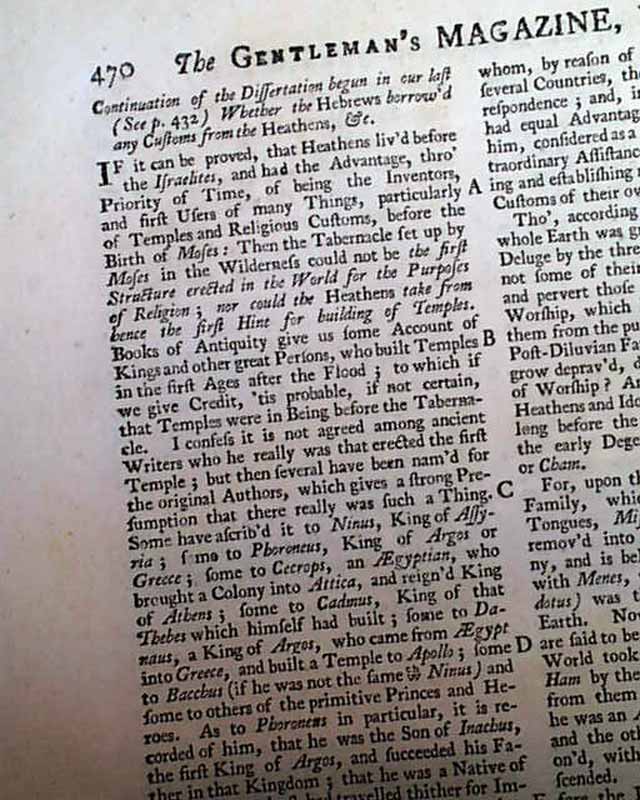 Item # 672387 THE GENTLEMAN'S MAGAZINE, London, September, 1739  One of the articles is headed: "Continuation  of the Dissertation begun in our Last Whether the Hebrews Borrow'd any Customs from the Heathens" which takes over 1 1/2 pages.
Another article has the: "Manifesto of the Catholick Majesty..."concerning a payment to the South Sea Tea Company.
Near the back is the: "Historical Chronicle" with news from England & other parts of Europe which includes a rather lengthy account which tells of the surrender of Belgrade.
Among the other articles are: "The Original Meaning of the Words, Liberty of the Press" "Debate in the House of Lords, 1675, on Addressing the King to Dissolve the Parliament" "Mal-Practices of the Navy Officers" "The Calculation of Mr. Whitefield's Hearers Justified" "Spanish Minister Turn'd Methodist" and much more.
There were no plates called for in such early issues.
Complete in 56 pages with full title/contents page featuring an engraving of St. John's Gate, 5 3/4 by 8 3/4 inches with uncommonly wide margins, great condition.