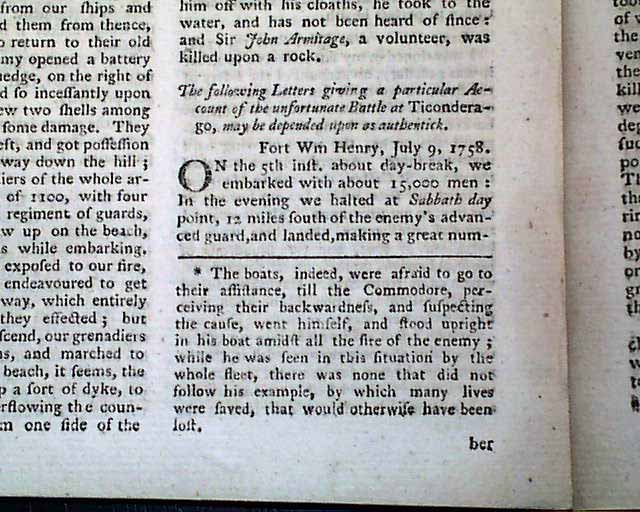 Item # 672358 THE GENTLEMAN'S MAGAZINE, London, Sept., 1758  The prime feature of this issue is the very nice & detailed article with a prefacing note: "The following Letter giving a particular Account of the unfortunate Battle at Ticonderoga may be depended upon as authentick."
What follows is the letter, datelined "Fort Wm. Henry, July 9, 1758", and the account takes two pages with much detail. It also includes a second letter datelined "Fort Wm. Henry, Monday, July 10" with additional details.
This battle was a failed attempt by British General Abercrombie who, despite having an army of 12,000 strong was defeated by the French General Montcalm and his force of just 3,000 defending their fort. Some very nice & very historic reading here.
Near the back is the "Historical Chronicle" which has the latest news reports of the day, mostly European, but included is over one-third of a column headed: "America" which has some nice French & Indian War content, beginning: "Brig. Gen. Forbes, after much labour & assiduity, marched the last division of his forces from Philadelphia...The same day the General himself set out for Carlisle..." with more.
This issue also features a nice foldout map titled: "Plan of Stralsund with the Trenches, Lines & Batteries that the Swedes made to defend it..." which includes a part of the Baltic Sea as well. This map folds out to measure 8 by 10 1/2 inches and has a related article.
The mentioned map is the only plate called for.
Complete in 56 pages, 5 by 8 inches, full title/contents page featuring an engraving of St. John's Gate, very nice condition. .