Home > Back to Search Results > Report from the Churchill River in Canada...
Click image to enlarge 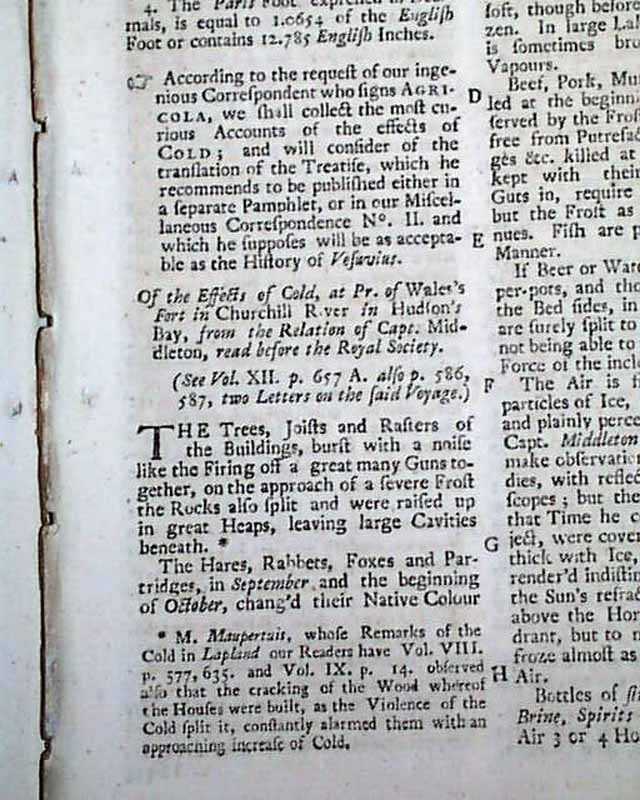 Item # 672277
THE GENTLEMAN'S MAGAZINE, London, England, March, 1743   One of the articles is titled: "Of the Effects of Cold at Pr. of Wales' in Churchill River in Hudson's Bay..." which is present-day Canada. This article takes over a full page.
Among the other articles in this issue are: "No Writers for the Ministry" and "Reasons for a Steady Opposition". Near the back is a section headed: "Historical Chronicle" with news from England and other parts of Europe. One of the reports is headed: "Extracts of Letters from our Fleet, Plantations" which has some talk of events in Cuba and elsewhere in the Caribbean. Also a letter from Providence, Rhode Island, and yet another with a Providence dateline, with much mention of events in America (see for portions).
Another report is headed: "Extract of a Letter from New England, from a Captain to his Friend at Barbadoes".
Complete in 56 pages with full title/contents page featuring an engraving of St. John's Gate, 5 by 8 inches, some corner chipping, but overall in very good condition.
There are no maps or plates called for in this issue.