Home > Back to Search Results > Criticizing Burgoyne for his failure in America...
Click image to enlarge 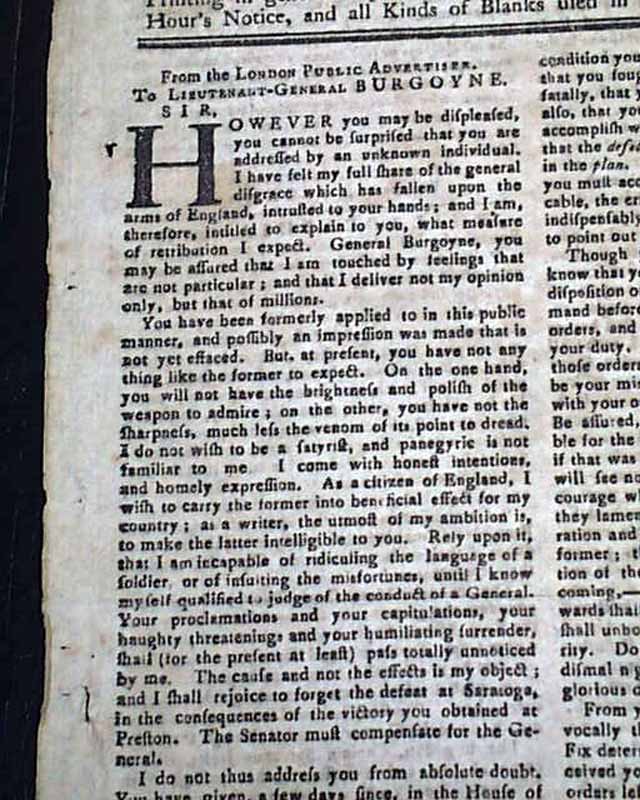 Almost the entire front page is taken up with a letter: "To Lieutenant-General Burgoyne" taken from a London newspaper and reprinted here.
Not surprisingly the theme is critical of Burgoyne, who is best remembered as the commanding general at Saratoga who gave up that strategic post to American General Gates, a major turning point in the war as the event spurred European support of the American cause, principally the involvement of France.
One bit note: "....that the people of this country are ever inclined to acquit the General, who has fought bravely, though he has fought unsuccessfully? This is their temper at all times, though it should, at some times, impeach their justice. In this condition you are not before them; they acknowledge that you fought bravely, alas! they know, but too fatally, that you were not successful..." and much more. The letter is signed by: Plain Sense".
Page 2 includes a letter from Baltimore concerning: "...disturbed...by various accounts of the enemy's cruizers being in Chesapeak Bay...". And additional reports concerning the Revolutionary War are on page 3. The back page includes an Act of the Mass. Legislature, signed in type by: John Hancock.
Four pages, damp staining, never-trimmed margins, generally good condition.