Home > Back to Search Results > The Long Expedition to the Rocky Mountains... LaFayette...
Click image to enlarge 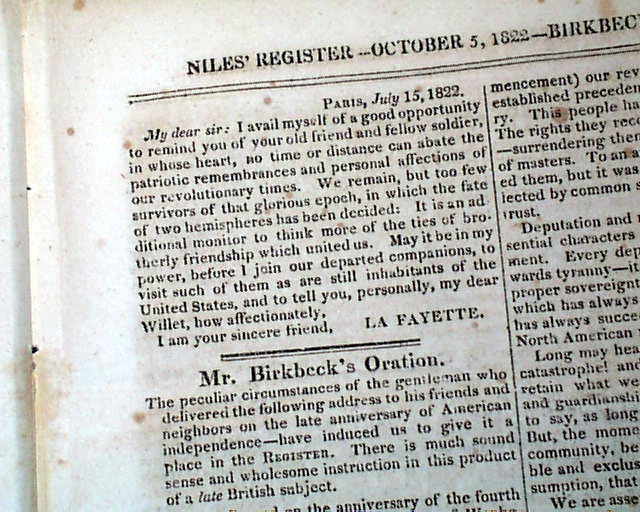 The Long Expedition to the Rocky Mountains... LaFayette...

Inside has: "Expedition to the Rocky Mountains" prefaced with: "Extracts from the history of the expedition from Pittsburg to the Rocky Mountains, in the year 1819 under command of major Long." The expedition of Major Stephen H. Long--the first scientific exploration of the Louisiana Territory to be accompanied by trained naturalists and artists. They struggled on foot and horseback along the front range of the Rockies, living off the land, recording rivers and land-forms, shooting birds, securing plants, and catching lizards and insects to preserve for study.
Most of this "extract" from the lengthy history includes a speech by one of the Omahaw Indians at camp Missouri, which relates his thoughts on the whites & their relations with other Indian tribes, including: "...I have always loved the whites since I first remember to have seen them, & this affection increases with my ago. All my nation love the whites...But it appears that there are many nations that live nearer to you than I, that do not love you, though you have done more for them than you have done for me..." with much more. Also some text concerning a white man marrying a squaw, plus other tidbits as well. This report takes 2 1/2 pages.
Also in this issue is a letter signed in type by: Bolivar, and a lengthy article: "Gen. LaFayette & Col. Willet which begins: "Every think relating to this patriot cannot but be interesting to the American reader. We find him, at an advanced age, in the French legislature..." and includes a letter from him to his friend from the Revolutionary War, Col. Marinus Willet, signed by him in type: La Fayette.
Sixteen pages, 6 1/4 by 9 1/4 inches, light foxing, minor loss to a lower corner, nice condition.