Home > Back to Search Results > Events at Port Hudson...
Click image to enlarge 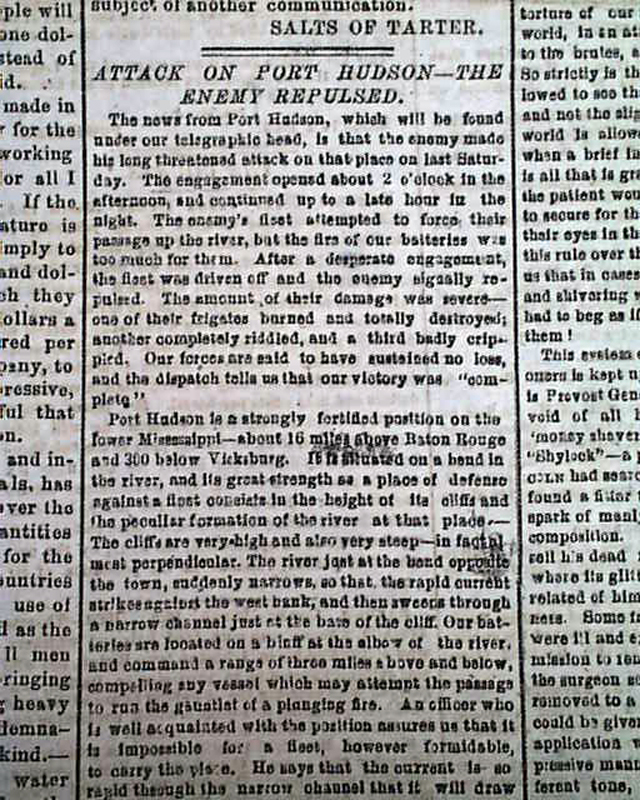 The front page includes: "Attack On Port Hudson--The Enemy Repulsed" "Missouri From An Eye-Witness--The Military Thraldom Over the State--Outrages & Tyranny of the Enemy--Horrible Treatment of Our Prisoners--A Dark Picture of Wrongs & Long Suffering". Also: "Attack On Port Hudson--The Enemy Open on Port Hudson--Desperate engagement--The Yankee Fleet Badly Disabled & Driven Off" and several smaller items as well as advertisements. (printing crease near the top affects the text & distracts but does not cause any loss of words or readability)
The back page has a great editorial which includes in part: "...The South has the best of omens to encourage it, the uniform success which has marked every military enterprise of the dawning year...in every one the Confederates have baffled or beaten their opponents...prove that the quality of the Confe3derate troops, at this moment, is more clearly superior to that of the enemy than at any previous period. It is on this superiority that the sole hope of the South must rest...The destiny of the Confederacy is completely staked on the struggle of the next three months...It would be difficult to exaggerate the importance of this campaign..." with much more. Also on the bkpg. are: "The Confederate Congress" "Virginia Legislature" "Drafting Slaves for Government Work" "A Plea for the Sick Soldier" & several smaller items.
Complete as a single sheet newspaper with a full banner masthead, a printing crease on the back page as well, causing no loss of text or readability; close-trimmed at the top of a back margin does not affect any mentioned articles, otherwise nice condition.