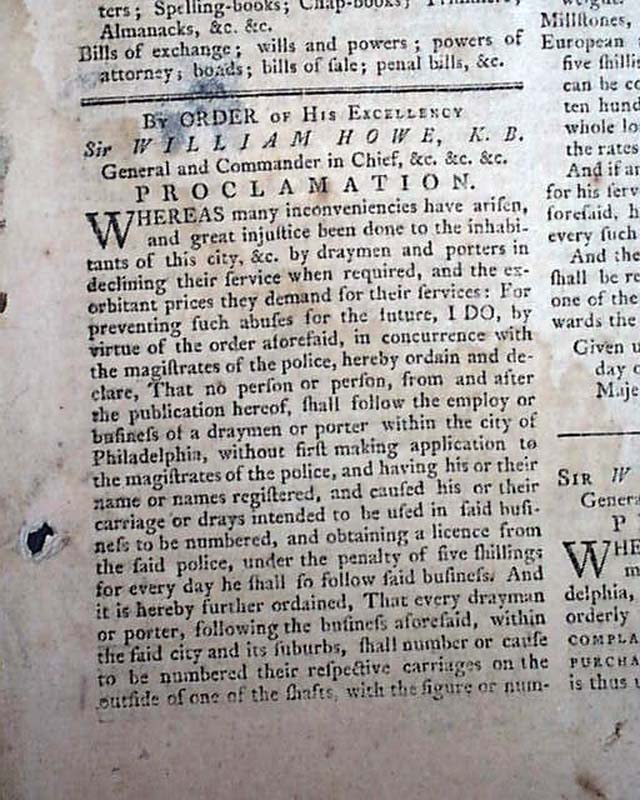 
THE PENNSYLVANIA LEDGER OR THE PHILADELPHIA MARKET-DAY ADVERTISER, February 25, 1778

This was a strongly Tory (supportive of the British cause) newspaper which began in 1775 and closed shop in May of 1778 when the British evacuated Philadelphia.
The front page includes two "Proclamations" by Sir William Howe, the second of which includes: "Whereas complaints have been made...the depredations complained of are encouraged by citizens purchasing from the soldiers and others what is thus unwarrantably taken from their neighbours..." which is signed in type: W. Howe.
Page 2 includes a letter which reads in part: "...following instances of barbarous cruelty which were lately suffered by a couple of harmless men who fell into the hands of a numerous party of militia, under the command of Mr. Lacy, A Brigadier of Pennsylvania, may serve as a sample of that inhuman violence to which the poor inhabitants are now exposed, wherever they have the misfortune to be within the reach of republican persecution..." with more.
All of pages 3 & 4 are taken up with ads and notices.
Four pages, numeric notations in margins next to ads (this was the editor's copy), minor damp stain near the bottom, nice condition. Not surprisingly, being a Tory newspaper the masthead features an engraving of the Royal coat-of-arms.