Home > Back to Search Results > Very early report on Jackie Robinson's road to the Dodgers...
Click image to enlarge 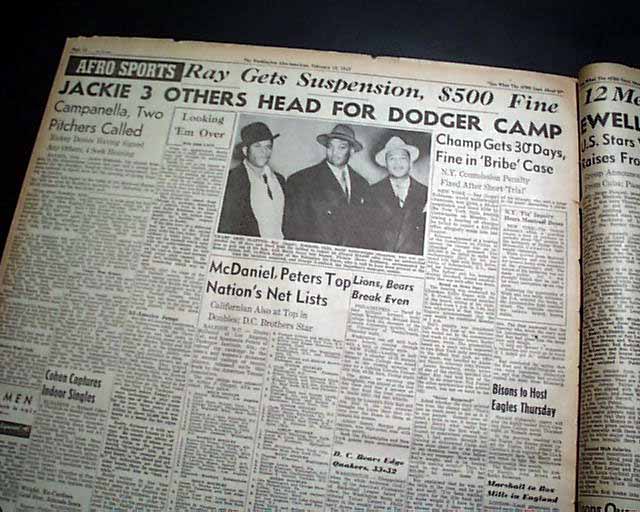 Very early report on Jackie Robinson's road to the Dodgers...

This being a newspaper meant for the Afro-American market, there perhaps could not be a better newspaper for this content. The sports section has a banner headline: "JACKIE 3 OTHERS HEAD FOR DODGER CAMP".
Perhaps only to be found in an Afro-American newspaper (we haven't found an equally impressive report in other titles), this notes one of the initial steps in Robinson breaking the color barrier in Major League Baseball. The report notes in part: "Jackie Robinson, top second baseman in the International League last year and a strong contender for the Brooklyn Dodgers' third base assignment, has been ordered to report here for the opening of spring training...Robinson will report to the camp of the Montreal Royals but will be eyed by Brooklyn manager, Leo Durocher, as a likely prospect for the hot-corner post...There is no indication that any other colored candidate will be present for the conditioning campaign..." with much more.
The same page has a headline: "Ray Gets Suspension, $500 Fine", being Sugar Ray Robinson, with a photo of him and two others.
Complete in 18 pages, some wear at the margins, mainly along the spine, generally good.