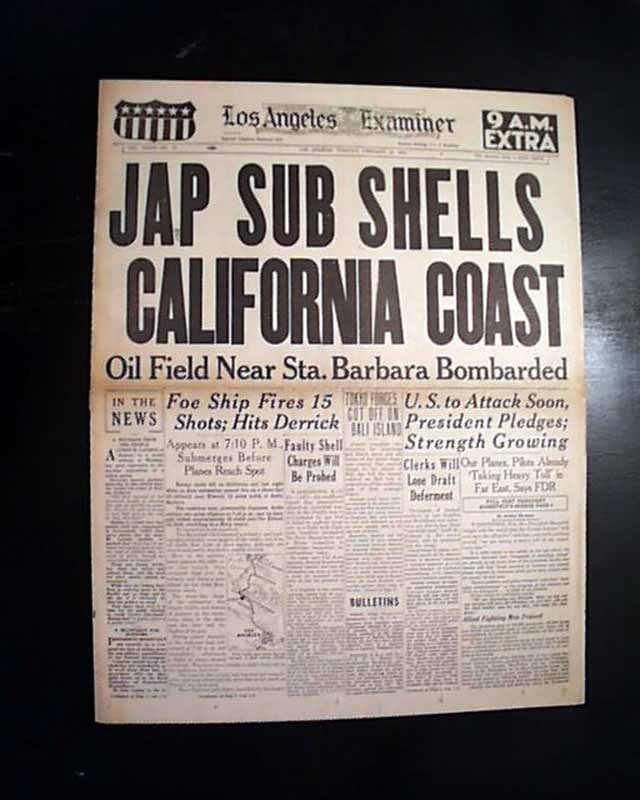 
LOS ANGELES EXAMINER--EXTRA, Feb. 25, 1942  This issue has a screaming, two-line banner headline reads: "JAP SUB SHELLS CALIFORNIA COAST" with a banner subheads as well: "Oil Field Near Sta. Barbara Bombarded".
During one of President Franklin D. Roosevelt's fireside chats, a Japanese submarine surfaced near Santa Barbara and shelled Ellwood Oil field in Goleta. Although damage was minimal, the attack had a profound effect on the public imagination, as West Coast residents came to believe that the Japanese could storm their beaches at any moment.
The following day appeared in local newspapers a totally erroneous report which played on the hysteria, known as the "Battle of Los Angeles". No planes were shot down, the only death was from a heart attack, and the only damage was from traffic accidents during the blackout & the barrage of artillery fire shot at the "swarms of planes" presumed to be over the skyline of Los Angeles.
The complete 24 page issue in very nice condition. Obviously this dramatic report would only appear as such in a Los Angeles newspaper.