Home > Back to Search Results > The Lowry War in North Carolina...
Click image to enlarge 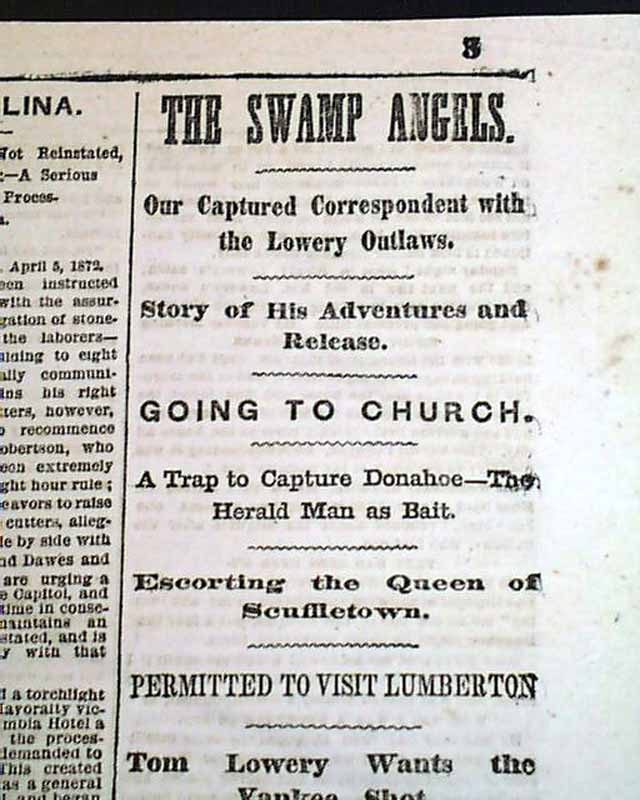 The Lowry War in North Carolina...

Over half of the last column on page three is taken up with a stack of heads on the Lowery (Lowry, Lowrie) War in North Carolina.
The Lowry War is a notable event in North Carolina history. Led by Henry Berry Lowry, whose father and brother were murdered by men of the Confederate Home Guard, a band of American Indian, White and African-American men waged a guerrilla war against the white establishment from 1864 to 1872. He and his gang attained a kind of mythic status.
The one-column heads include: "THE SWAMP ANGELS" "Our Captured Correspondent with the Lowery Outlaws" "Story of His Adventures & Release" "A Trap to Capture Donahoe--They Herald Man as Bait" "Escorting the Queen of Scuffletown" "Tom Lowery Wants the Yankee Shot" "A Journey to the Devil's Den" "Accused of Being A Spy" "A Tramp of Terrors" "In the Bandits' Gloomy Nest" "The Outlaws' Stories" and so much more.
The reporting is very detailed and takes all of page 4 and a bit of page 5.
Twelve pages, slightly irregular at the spine margin, a few minor margin tears, good condition.