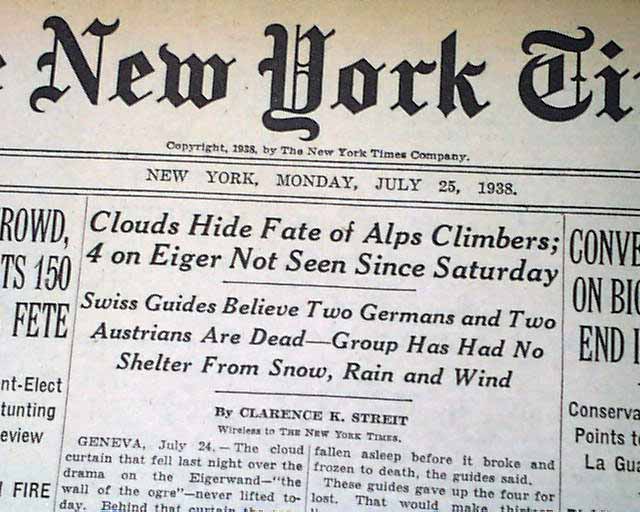 The top of the front page has a two column heading: "Clouds Hide Fate of Alp Climbers; 4 on Eiger Not Seen Since Saturday" with subhead. (see) Coverage on the 1st time the North face of Eiger Mountain was climbed continues inside with related photo. They would achieve their goal on this day. Always nice to have notable events in history reported in this World famous publication.
Other news,. sports and advertisements of the day. Complete with all 30 pages, light toning at the margins, nice condition.

wikipedia notes: It was first climbed on July 24, 1938 by Andreas Heckmair, Ludwig Vörg, Heinrich Harrer and Fritz Kasparek, a German–Austrian group. The group had originally consisted of two independent teams; Harrer and Kasparek were joined on the face by Heckmair and Vörg, who had started their ascent a day later and had been helped by the fixed rope that the lead group had left across the Hinterstoisser Traverse. The two groups, led by the experienced Heckmair, cooperated on the more difficult later pitches, and finished the climb roped together as a single group of four.