Home > Back to Search Results > Reports from the Civil War with a Confederate perspective...
Click image to enlarge 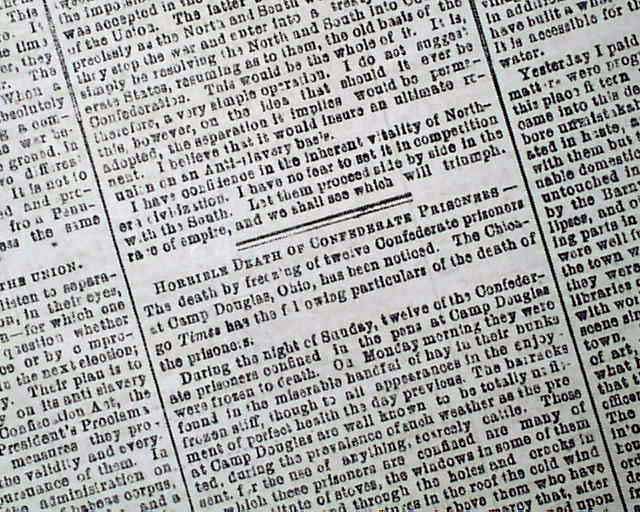 Reports from the Civil War with a Confederate perspective...

The front page includes: "The Northern Press & the Mediation Question" "The Radicals on the War" which has several subheads including: "Re-Union--The South Independent--the Army Conservative--The Proclamation A Failure" and more. Also on the front page: "Horrible death of Confederate Prisoners" "The Yankee Settlements on the South Carolina Coast--Yankee Cabins Looming Up--Appearance of Hilton Head & Beaufort--Drilling of the Negro Regiments" "Additional From the North" "From Cairo--Arrival of Confederate Prisoners" and much more.
The back page has the always interesting editorial, this one beginning: "It is difficult to decide whether the doubts & delays of the Federal fleet sent to the coast of South Carolina to gobble up the city of Charleston are causes of complacency or regret...". There is also much reporting from "The Confederate Congress" plus other small items relating to the Civil War from the Confederate perspective.
Complete as a single sheet newspaper with a full banner masthead, a small hole in the blank margin above the masthead affecting nothing, otherwise in nice condition.