Home > Back to Search Results > Electing a Confederate President...
Click image to enlarge 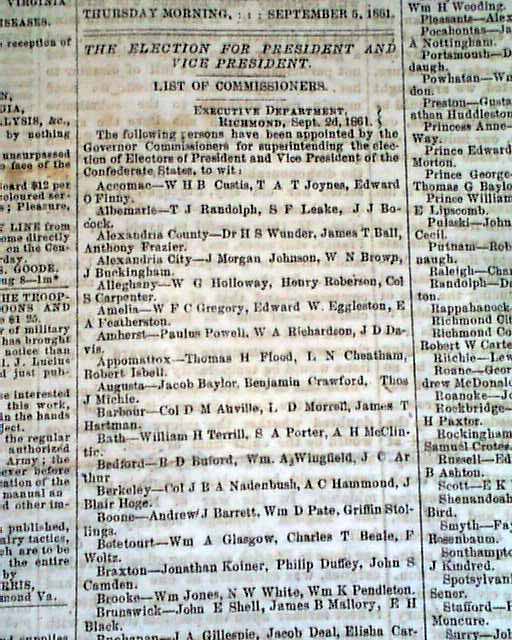 Not only is this a nice newspaper from the Confederacy, but it is from the Confederate capital and consequently has much page 4 reporting of Acts from the Confederate Congress.
The front page has 1 1/2 columns on: "The Election For President And Vice President - List of Commissioners" chosen for: "...superintending the election of Electors of President and Vice President of the Confederate States...".
The ftpg. also has "What Texas Has Done the Past Year" and "The Atlantic Sea-Coast" the latter beginning: "Since the capture of Fort Hatteras by an immense Federal fleet, the subject of our coast defenses is beginning to excite attention...".
Page 2 has a nice & lengthy editorial concerning the war, always interesting reading in this newspaper as there is a strong pro-Confederate stance on all matters military. It includes: "It is an instructive study to investigate...the error of the Northern railway system. Like everything else at the North, it rests upon an artificial & unnatural basis...this stupendous railway system must tumble into ruins and remain a monument of Northern folly..." and more.
Also on page 2 is: "Movements And Spirit of the War" with many subheads including: "The Latest From Hatteras" "A Suspected Traitor" "Beacon Island Abandoned" "Troops To The Defense" "Important From Fort Pickens--Probable Evacuation by the Federals" "The Federal 'Victory' At Charleston" "Trails & Tribulations of A Prisoner" "A South Carolinian Running the Gauntlet With The Yankees" and more.
Page 3 has more Civil War reporting as well as various ads. The back page is mostly taken up with various Acts of the Confederate Congress, plus some ads.
Complete in four pages, never bound nor trimmed, in very nice condition.