Home > Back to Search Results > Sherman is about to capture Savannah...
Click image to enlarge 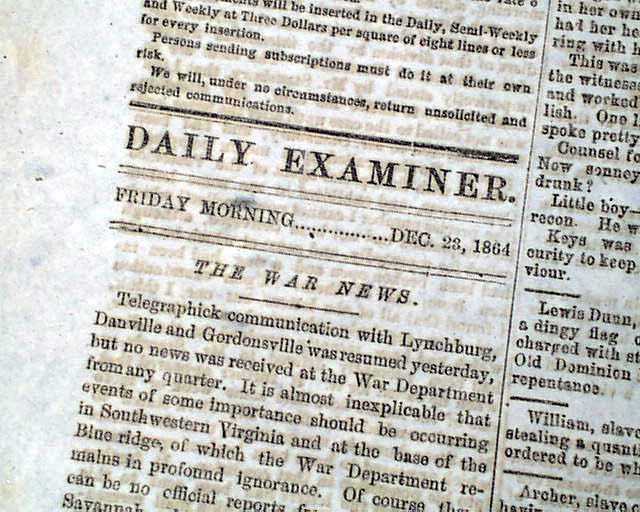 Sherman is about to capture Savannah...

A newspaper not only from the Confederate state, but from the capital of the Confederacy. The front page includes: "The War News" "New Year's Dinner to General Lee's Army" "A Present For General Lee" "From Wilmington" and other smaller items in addition to a wealth of advertisements.
The back page has a notable report concerning Sherman's eminent capture of Savannah, with: "From Sherman's Army--The Situation At Savannah--Its Capitulation Expected" with the report giving the hopeless situation of this Georgia city.
Also on the back page: "From Grant's Army" "Miscellaneous" and a lengthy editorial which is always interesting reading. Also included are reports from the: "Confederate States Congress" which includes a short note signed in type by the President: Jefferson Davis.
Complete as a single sheet newspaper with a one column masthead, typical with Southern newspapers late in the war as most paper mills were in the North. Very nice condition.