Home > Back to Search Results > Spanish cause trouble on the American seas...
Click image to enlarge 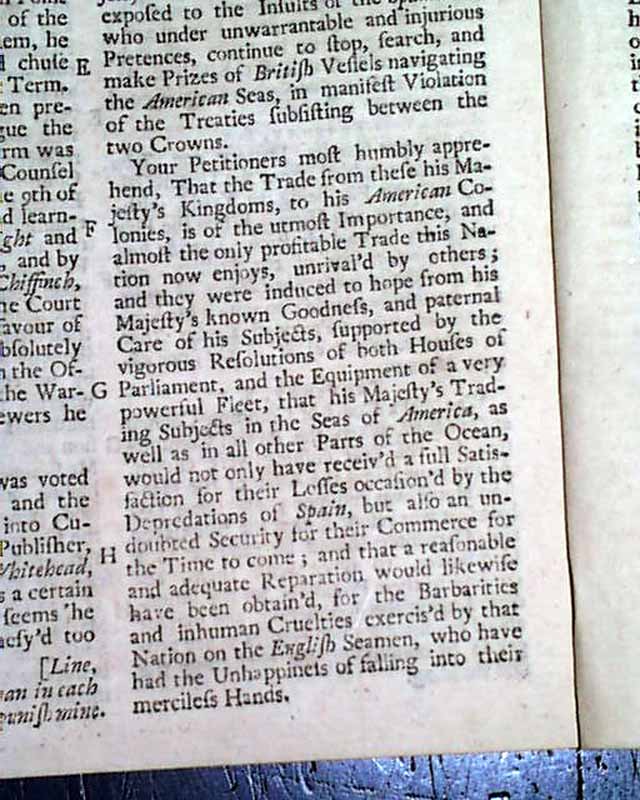 Spanish cause trouble on the American seas...

Item # 671791
THE GENTLEMAN'S MAGAZINE, London, England, February, 1739  Among the articles noted in the table of contents are: "Of the Nature of Fire, Continu'd" "Proposal for Amending the Ten Commandments" "Seventh & Eighth Commandments, how to be Understood" "Ninth and Tenth, how to be Taken" "The Case of the South Sea Company" "Reasons for a Disciplin'd Militia" "Swiss Maintain no Regular Forces" and more.
Near the back is the: "Historical Chronicle" with news from England & other parts of Europe. One of the reports includes some talk of the American colonies, including: "...Petitioners are unable to express that they perceive the trade to his Majesty's American Colonies still continues exposed to the insults of the Spaniards...continue to stop, search and make prizes of British vessels navigating the American Seas in manifest violation of the treaties subsisting between the two crowns..." with more.
There are no plates called for in this issue.
Complete in 56 pages, 5 by 8 inches, full title/contents page featuring an engraving of St. John's Gate, bit of light dirtiness to the ftpg., good condition.