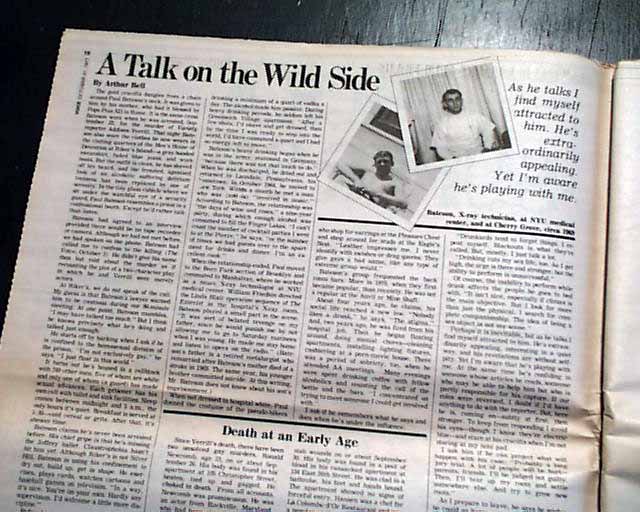 
THE VILLAGE VOICE, New York, Oct. 31, 1977  Inside has an article by Arthur Bell,  a journalist and LGBT activist who first wrote for the Village Voice in 1969 on the Stonewall riots. After Variety Reporter Addison Verrill, a friend of Bell's, was killed in 1977, Bell wrote about the case in the Voice. In response he received a call from someone claiming to have been the killer, objecting to be called a "psychopath". Ultimately the killer was identified as Paul Bateson who was arrested and later convicted of murder.
This article is one of a series of columns about a string of unsolved murders of gay men, which ultimately became the inspiration behind the William Friedkin film 'Cruising'.
This article begins: "The gold crucifix dangles from a chain around Paul Bateson's neck. It was given to him by his mother....It is the same cross Bateson wore when he was arrested...for the murder of Variety reporter Addison Verrill..." with much more, taking half a page.
As most might be aware "The Village Voice" was an American news and culture paper, known for being the country's first alternative newsweekly. It introduced free-form, high-spirited, and passionate journalism into the public discourse a tradition it maintained throughout its 60+ year history.
Complete with all 112 pages, tabloid-size, never bound, folded once, nice condition.