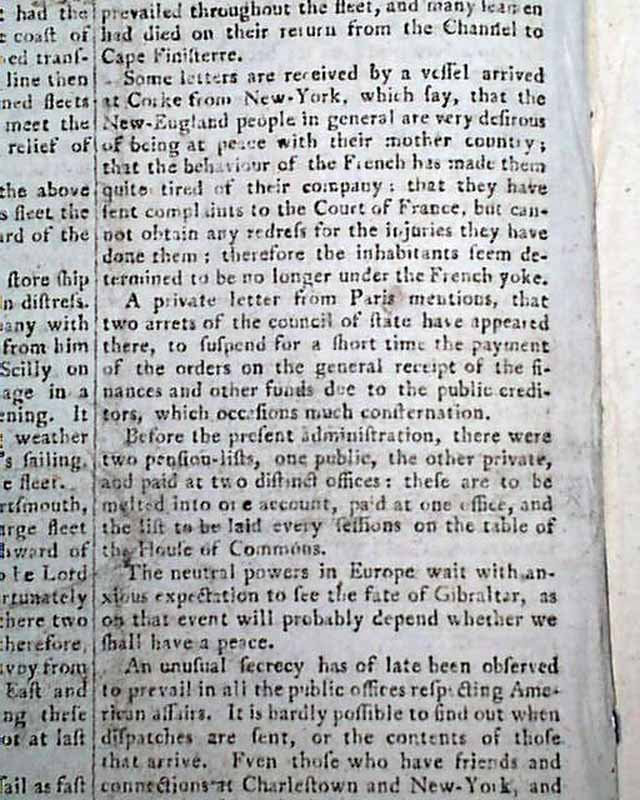 
THE EDINBURGH ADVERTISER, Scotland, Sept. 27, 1782  Inside has  report which includes: "...from New York which say that the New England people in general are very desirous of being at peace with their mother country...".
Also a: "Letter from a Gentleman of Considerable Property in Philadelphia to an English Nobleman" concerning financial matters, with mention of Robert Morris and G. Washington.
A very notable item reports: "Yesterday arrived a mail from New York which brings the following very important intelligence, of his Majesty having offered to declare America INDEPENDENT."
Also a letter from New York signed by: Guy Carleton which begins: "The pacific disposition of the parliament & people of England towards the Thirteen Provinces...We are acquainted...that negociations for a general peace have already commenced at Paris...his ministers to direct Mr. Grenville that the independency of the Thirteen Provinces should be proposed by him...".
And yet another notable report begins: "By the above letter it appears that the Independence of America has been proposed...Instead of the Colonies in rebellion against Congress, the Thirteen American States are declared Independent by his Majesty's Commissioners."
More interesting reports regarding closing events of the Revolutionary War as well.
Eight pages, 8 3/4 by 11 1/2 inches, nice condition.