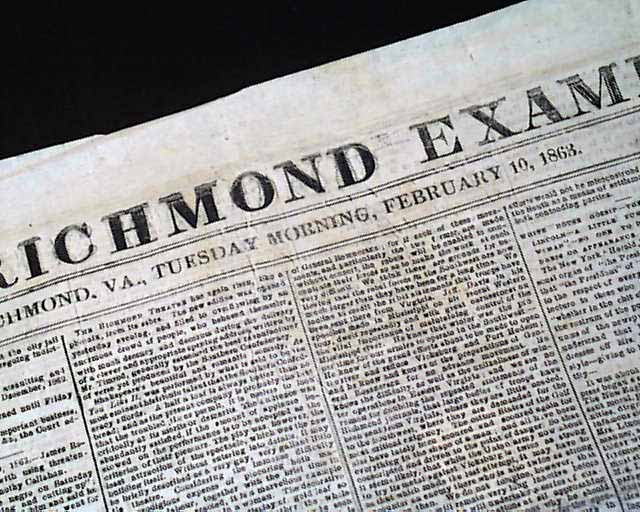 The ftpg. includes: "From Fredericksburg" which begins: "The path to Heaven is not more straight & narrow than that of a correspondent from the seat of war...The indications of activity in the Yankee army still continue..." and much more. Also on the ftpg: "City Intelligence" "Additional From The North with subheads: "The Great Impending Battle at Vicksburg--The Strength of the two Armies--The Plan of Attack--The Chances of Success". Also: "Notes Of The War with subheads: "Discontent & Disaffection in the Federal Army in Louisiana--Movements of the Enemy About Vicksburg--The Defences of Savannah" and more. One of the subheads is: "General Milroy & the Emancipation Proclamation".
The back page has a lengthy editorial which seems to focus on the abuse of the credit system and how it has affected the war. Much of the balance of the bkpg. is taken up with: "The Confederate Congress" and: "Virginia Legislature" reports. But there is also: "The Great Want of the Yankee Nation' which begins: "The great want of the Yankee nation just now is a general...". And there is also various "Telegraphic News" with the latest reports from the fields of action. There  is also a report with small head: "General Tom Thumb and His Bride" which begins: "General Tom Thumb--the lilliputian general--has committed matrimony...".
Complete as a single sheet newspaper with a full banner masthead. Nearly close-trimmed at the bottom left but causing no loss. Some edge tears at the bottom margin, otherwise in very nice condition.