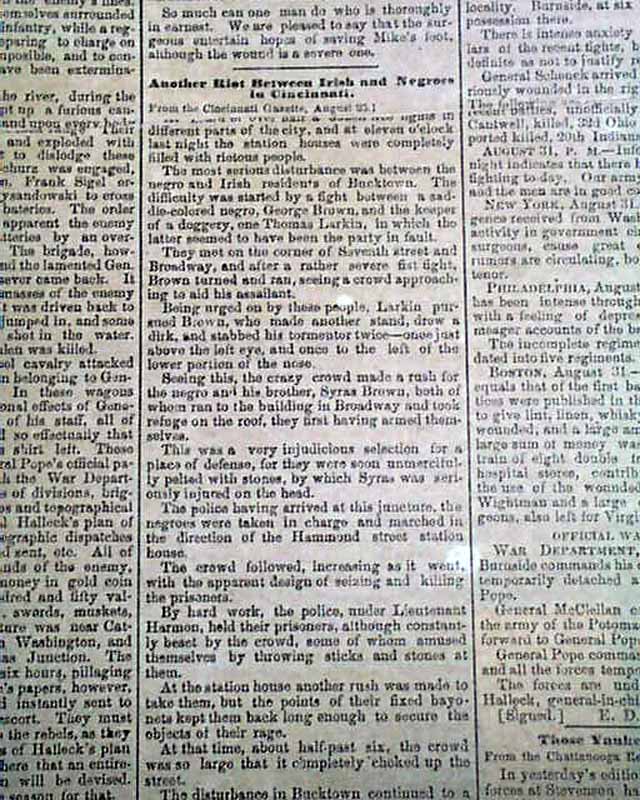 
THE MEMPHIS DAILY APPEAL, Grenada, Mississippi, Sept. 8, 1862  If the title and city of publication seem to disagree, they do not. This newspaper had a fascinating history during the Civil War.
Memphis was a Confederate stronghold up through the Battle of Memphis on June 6, 1862, at which time the Yankees moved in and it became a Yankee city. Being a strong voice for the Confederacy, the "Memphis Appeal" newspaper would not continue under Yankee control. As Wikipedia notes: "...On June 6, 1862, the presses and plates were loaded into a boxcar and moved to Grenada, Mississippi, where it published for some time. The Appeal later journeyed to Jackson, Mississippi, Meridian, Mississippi, Atlanta, Georgia, and finally Montgomery, Alabama, where the plates were destroyed on April 6, 1865, only days before the Confederate surrender, halting publication of what had been one of the major papers serving the Southern cause." So this one newspaper published in six different Confederate cities during the Civil War.
Among the front page reports are those headed: "Release of Tennessee Prisoners of War" "Another Rio Between Irish & Negroes in Cincinnati" "The War In Kentucky--Nelson Defeated at Richmond" "Great Excitement at Lexington" "Buckner Advancing on Bowling Green" "The Late Battles in Virginia" and more.
The back page has some unusually large heads: "Glorious News!" "COVINGTON & NEWPORT CAPTURED!" "Ohio Invaded!" "CINCINNATI Surrendered!" "Government Property Seized!" and more.
Complete as a single sheet newspaper of large folio size, even toning, a bit of margin chipping at the spine & bottom, generally good.