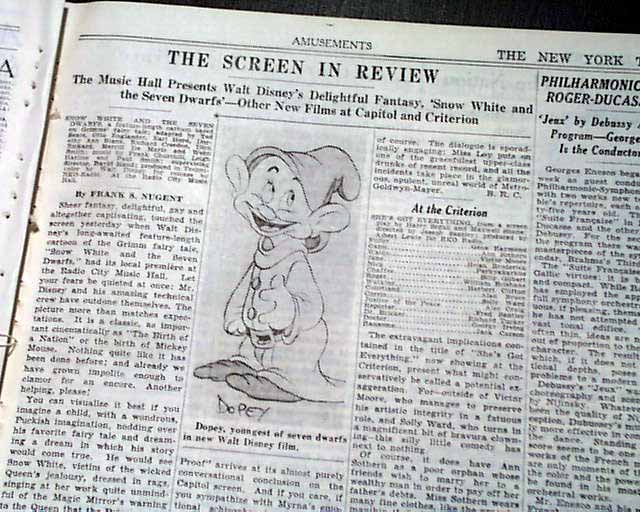 
NEW YORK TIMES, January 14, 1938  Page 21 contains a very nice, detailed, and lengthy review of the new animated feature-length movie "Snow White and the Seven Dwarfs", the very first by Walt Disney. The very favorable review begins: "Sheer fantasy, delightful, gay and altogether captivating, touched the screen yesterday when Walt Disney's long-awaited feature-length cartoon of the Grimm fairy tale, "Snow White and the Seven Dwarfs" had its local premiere at the Radio City Music Hall. Let your fears be quieted at once: Mr. Disney and his amazing technical crew have outdone themselves..." with more (photos show portions). Included with the review is a photo from the film, showing Dopey.
Although its world premiere was on Dec. 21, 1937, its general release was on February 4, 1938, several weeks after this review. It was the highest grossing film in movie history until unseated by "Gone With The Wind". It was the first full length animated feature to be produced by Walt Disney, and the first American animated feature film in movie history.
The same page includes an advertisement for the film, playing at Radio City Music Hall. An earlier page has a small advertisement for the "full color" book version of it.
Complete in 40 pages, this is the "rag edition" printed on very high quality paper meant for library holdings where long-term storage required a sturdier grade paper. In excellent condition and still very white.