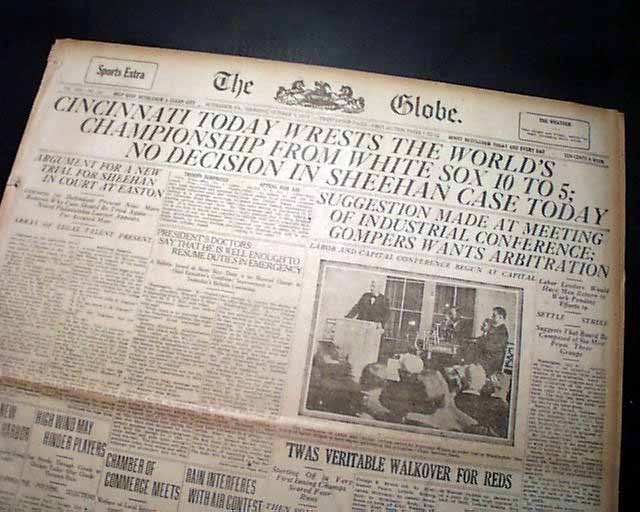 A great, two-line banner headline announces the outcome of the final game of the controversial "Black Sox" World Series: "CINCINNATI TODAY WRESTS THE WORLD'S CHAMPIONSHIP FROM WHITE SOX 10 TO 5"
This headline reports the final game of what is now known as the "Black Sox Scandal" World Series, wherein 8 Chicago players were eventually accused of intentionally losing games in exchange for money from gamblers.
The front page report has a 3 column head: " 'TWAS VERITABLE WALKOVER FOR REDS" with subheads: "Starting Off in Very First Inning Champs Scored Four Runs" "Then Some More" "White Sox Use Up Several Pitchers in Effort to Stave Off Defeat"
Then this report begins a very detailed account of the game inning-by-inning, carrying over to page 11.
This issue has reports of the next-to-last Series game & thoughts on the anticipation of the final game outcome, with a banner headline: "EXCITEMENT IN BASEBALLDOM IS AT HIGH PITCH OVER WORLD'S SERIES OUTCOME" with subheads including: "Ball Game In Chicago Today" "Battle for World Series Pennant Again Enters in Windy City" "White Sox Look Up" "Experts Analyze Yesterday's Game" "White Sox Come Back" "Big Battle Today" and more. Included is a 3 person photo composite of: "Pitcher and Outfielders Who Batted Reds To Victory...".
Another of the sports pages has a great photo montage of the Cincinnati Reds players, plus one of the 6 key players of Reds, and one of: "Groh Safe At Third...".
Complete in 24 pages. This issue has various old tape mends within causing dark stains, but fortunately none of thes stain interferes with the reports noted. Partially loose at the spine, a few modern archival mends, light browning at the margins. 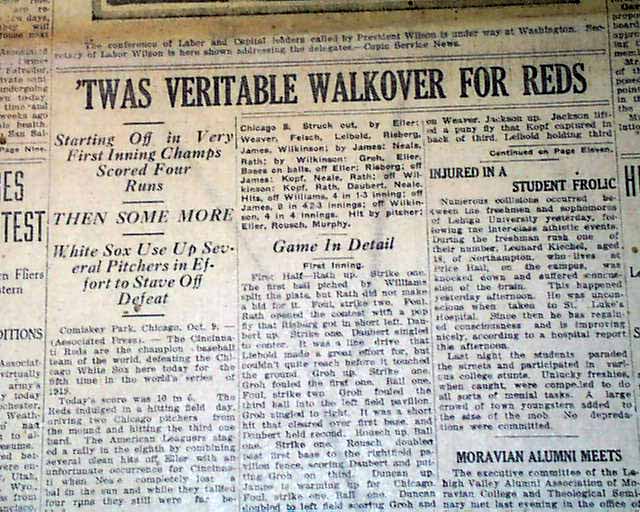 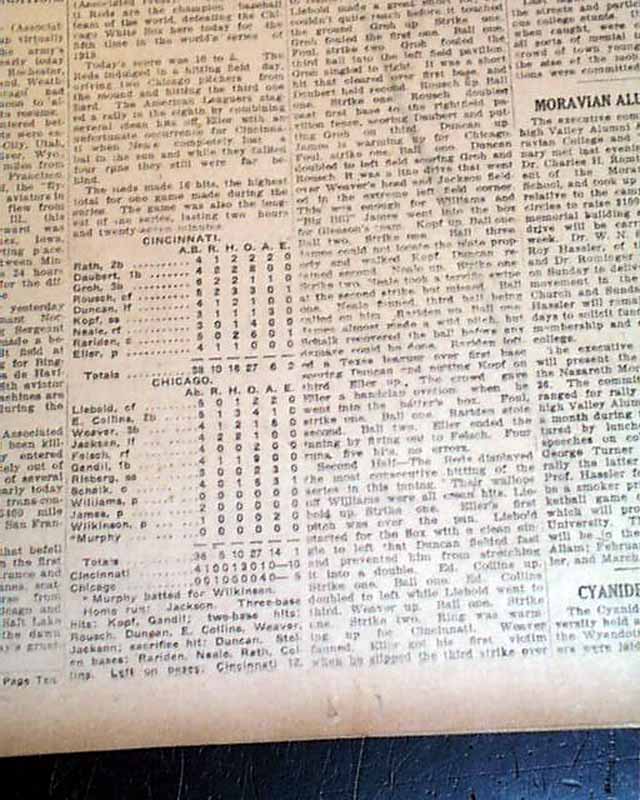 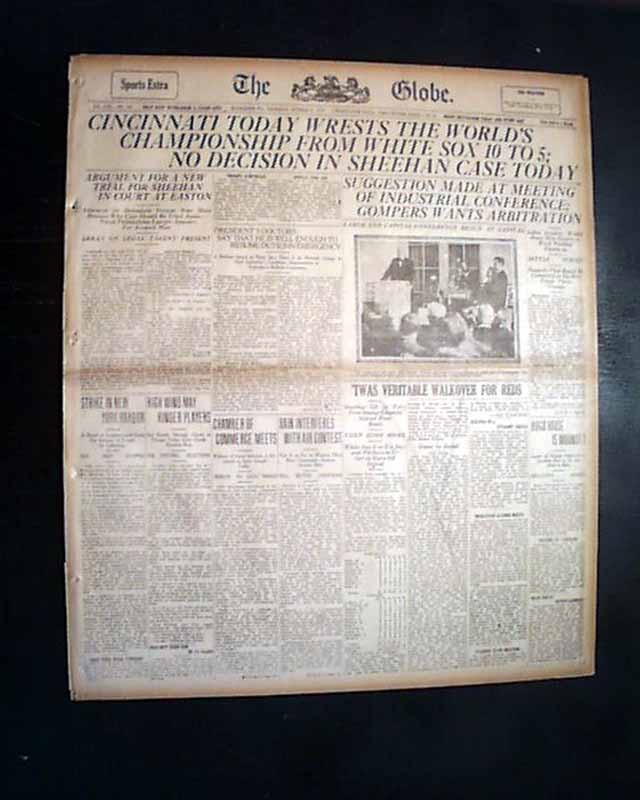 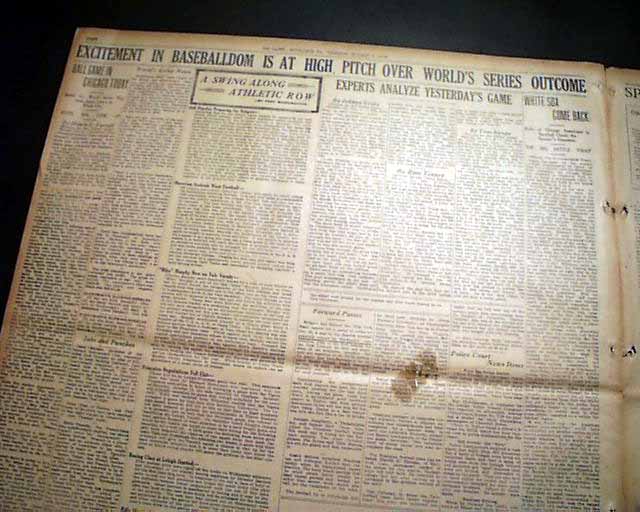 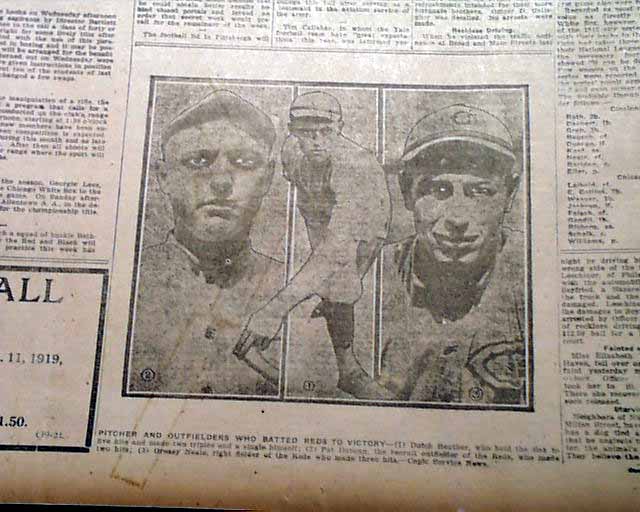 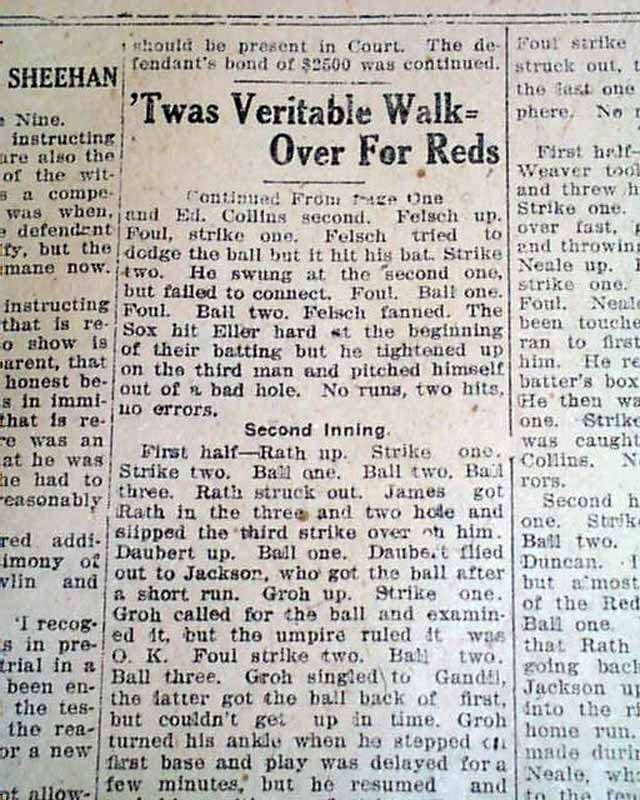 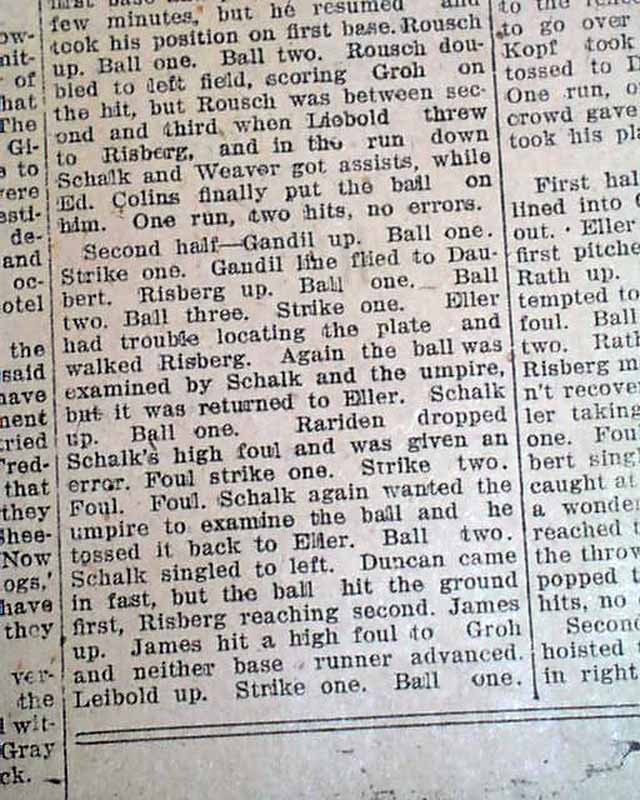 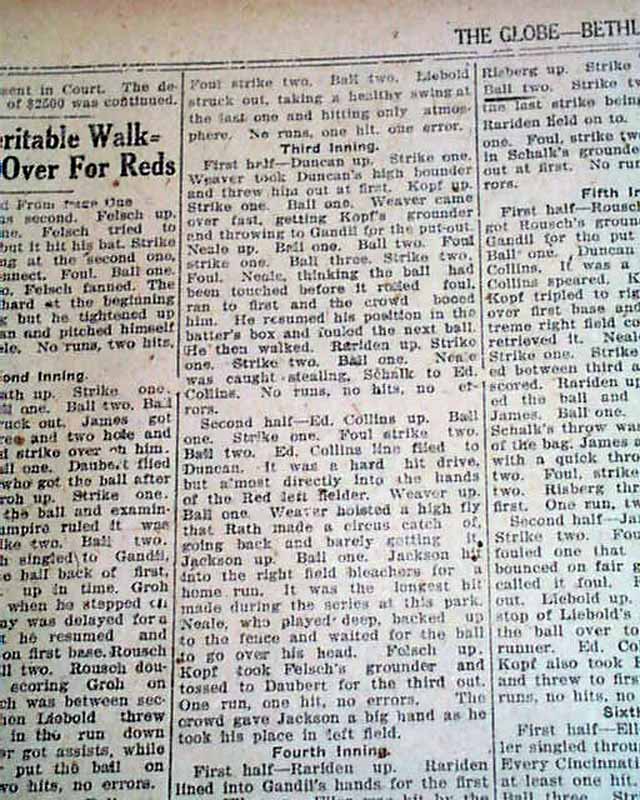 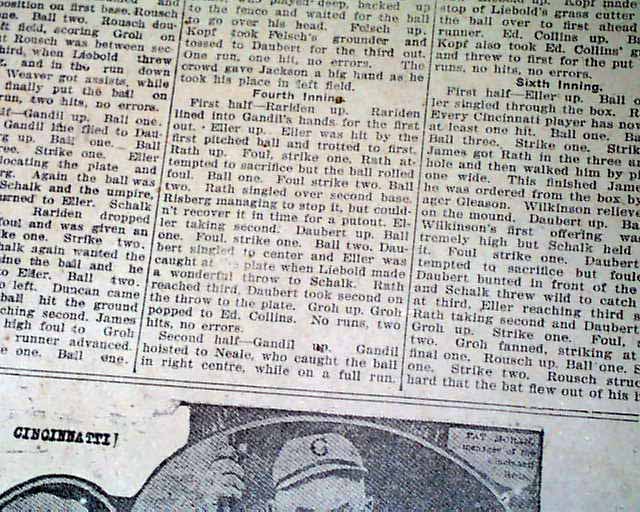 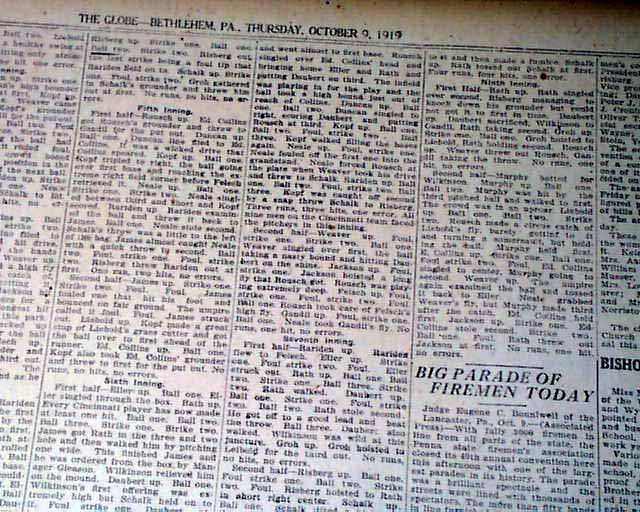 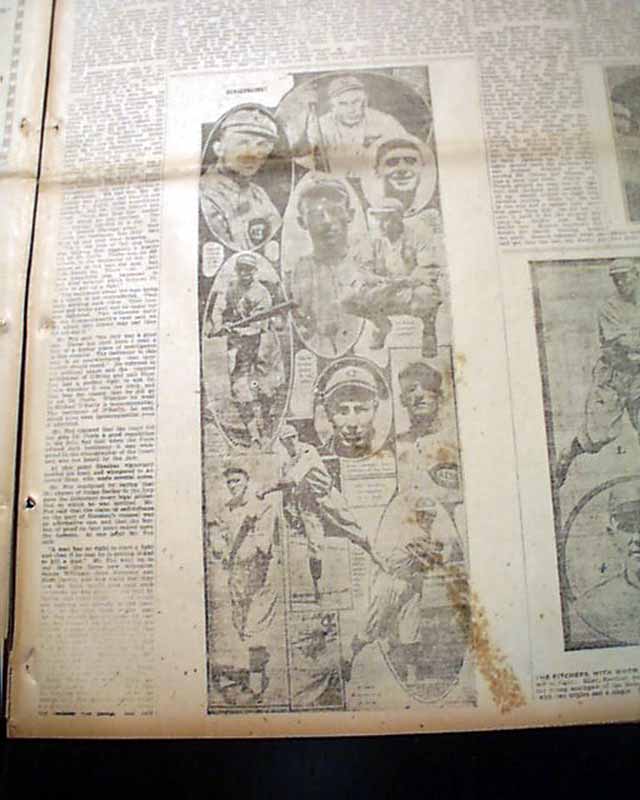 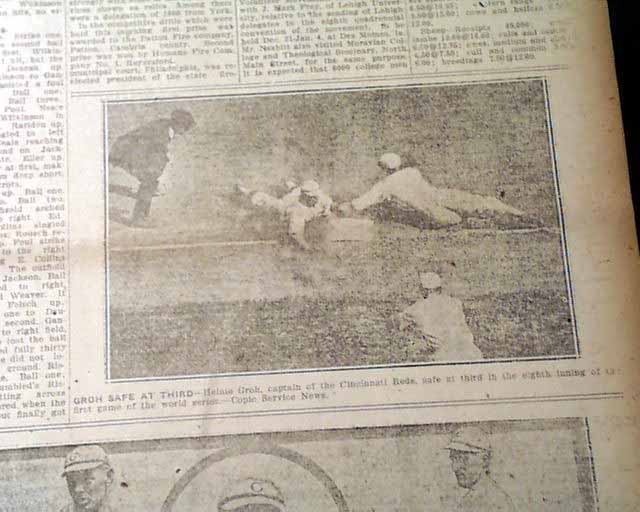 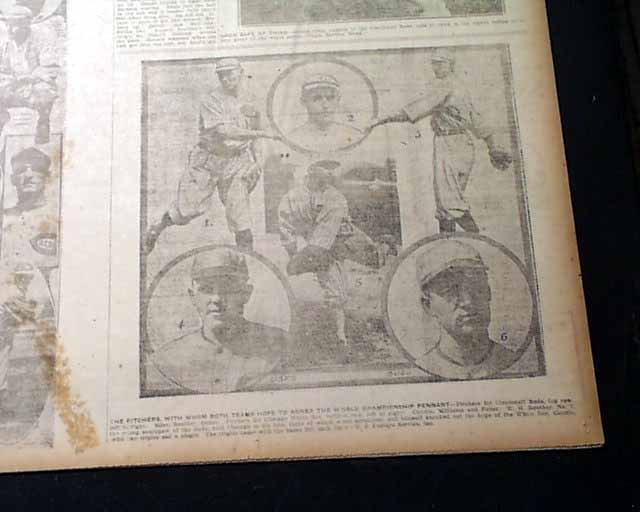