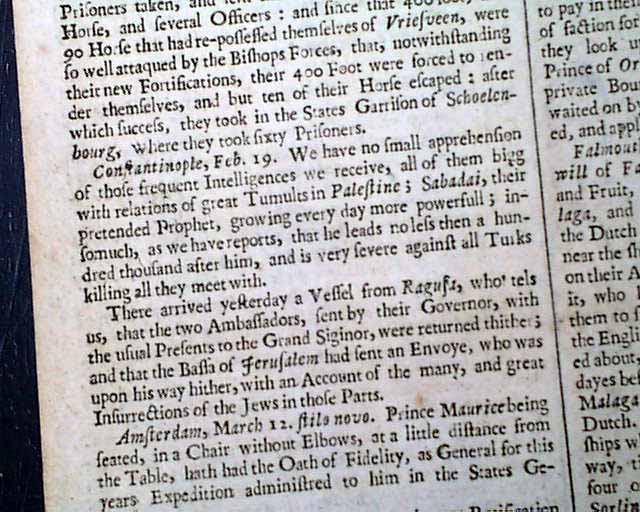 This is a significant issue if only because of the early date, as the London Gazette is the world's oldest continually published English language newspaper having begun in this year of 1665. This is issue number 34.
Of much greater significance is the content, as the back page has a very rare report concerning the 17th century Jewish prophet, Sabbatai Zevi, printed in this issue as "Sabadai".
The report is datelined "Constantinople, Feb. 19" and reads: "We have no small apprehension of those frequent intelligences we received, all of them bigg with relations of great Tummults in Palestine; Sabadai, their pretended Prophet, growing every day more powerfull; insomuch, as we have reports, that he leads no less than a hundred thousand after him, and is very severe against all Turks killing all they meet with."
This is followed by another but unrelated Judaica item, noting: "...and that the Bassa of Jerusalem had sent an envoye, who was upon his way hither, with an account of the many and great insurrections of the Jews in those parts."
Complete as a single sheet newspaper, 6 3/4 by 10 3/4 inches, a bit of minor foxing at the front page fold, nice condition.