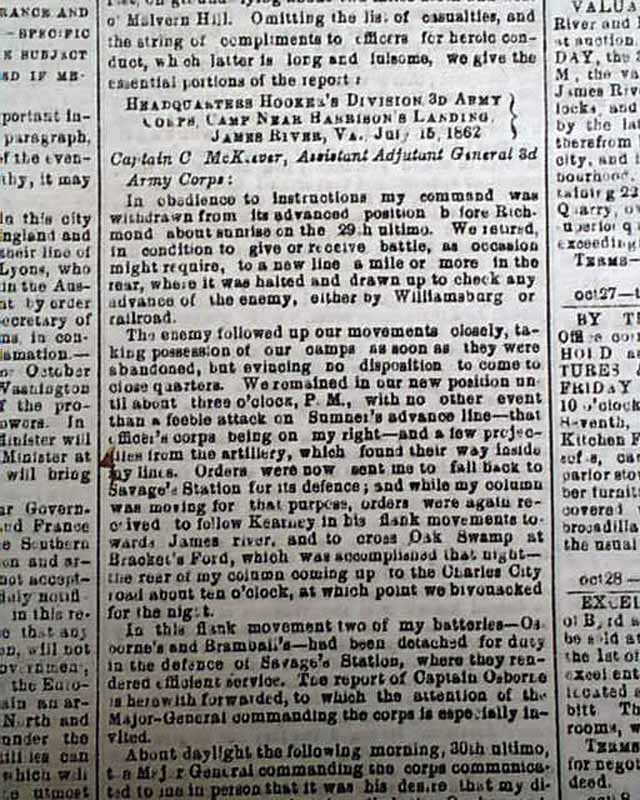 
DAILY RICHMOND EXAMINER, Virginia, Oct. 31, 1862  Not just a newspaper from the Confederates States, but from the capital of the Confederacy. The front page includes: "Confederate & State Authority" "Killed At Pocotaligo" "Southern Items" "The Courts" "City Intelligence" "The Way Whiskey is Smuggled Into Richmond" and several Acts from the Confederate Congress.
The back page includes a lengthy editorial, a few bits of which include: "...that recent dispatches have been received here form General Lee in which it is stated that he had made a close reconnaissance to the banks of the Potomac...every Yankee had been driven across the river leaving no appearance of the enemy in Virginia..." and "It appears that considerable panic already prevails at some points on our seacoast in anticipation of attacks by the enemy.  It is reported that in Savannah many of the people are acting on the foolish & foregone conclusion that the city is to be captured..." with much more (see photos). Also on the bkpg: "Additional From The North" with subheads including: "The Rebels Falling Back--The Burning of the Blanche--Captain Smith's Experience in Richmond--General Kearney's Letter...". Also: "Latest From the North" plus there is a lengthy letter signed in type by: Joseph Hooker, concerning "The Battle of Glendale".
Complete as a single sheet newspaper, close-trimmed at the bottom portion of the left margin does shave some letters at the margin's edge.

Newspaper from the Confederacy...