Home > Back to Search Results > Order from "Beast Butler"...
Click image to enlarge 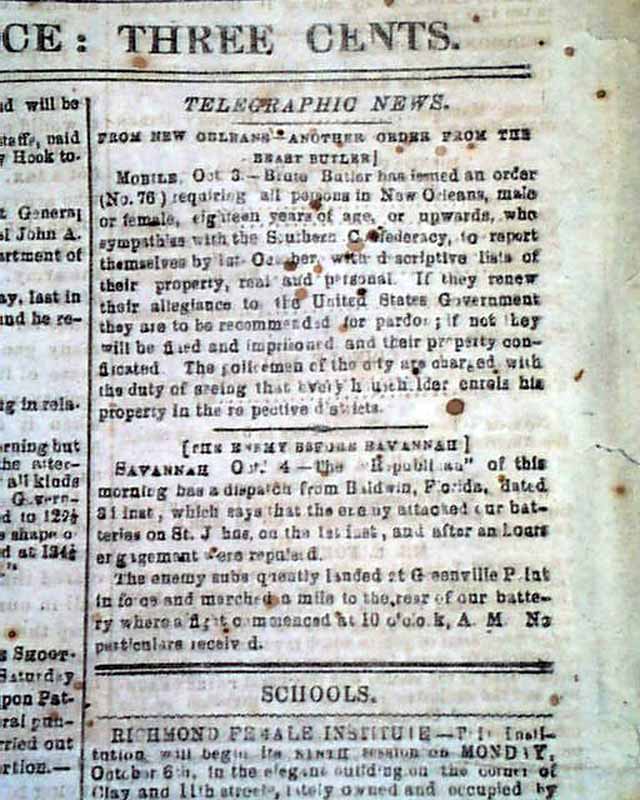 
DAILY RICHMOND EXAMINER, Virginia, Oct. 6, 1862  Not just a nice Confederate newspaper, but from the capital of the Confederacy through which all important war news and reports flowed.
The front page includes: "From The Army of Northern Virginia" "The Military Exemption Act" with many subheads. Also: "Correspondence" which includes several (see photos), and: "Later From the North" "Latest News From the North" and "Telegraphic News--From New Orleans Another Order from the Beast Butler!" and more.
The back page has a lengthy editorial taking 1 1/2 columns & including in part: "...Virginia furnished nearly all of the arms, ammunition and accountrements that won the battles of Bethel and Manassas. She gave the Confederate service from her own armories and stores...". There is also much reporting from: "The Confederate Congress" as well as reports from: "The Virginia Legislature".
Complete as a single sheet issue with a full banner masthead. Some small tears at the right margin, generally in nice condition.