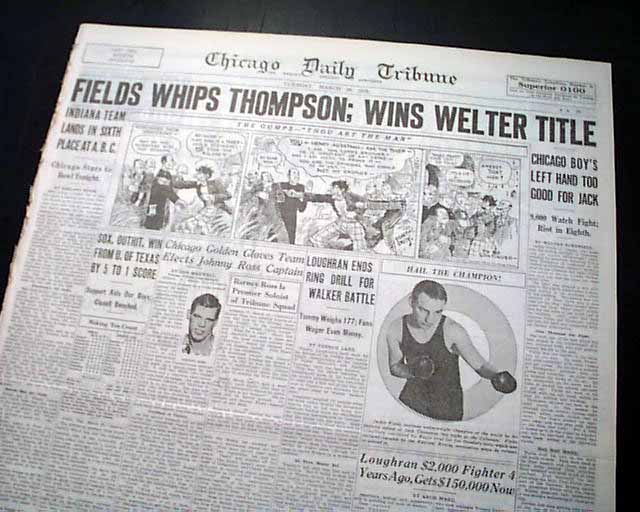 The front page has a nice banner headline: "FIELDS WHIPS THOMPSON; WINS WELTER TITLE" with subheads and photo of Fields. (see) Nice for display. Great to have in this Chicago publication, Fields hometown. Rare as such.
Complete section 2 only with 24 pages, rag edition in nice condition.

wikipedia notes: Fields won the world welterweight title in 1929 and 1932. He defeated Young Jack Thompson before 9,000 fans on March 25, 1929 in a ten round unanimous decision in Chicago. Most sanctioning bodies considered the match a title bout. The Akron Beacon Journal wrote that Fields was "unstoppable in his offensive, unswerving in his determination, and completely the master of his foe". In the first two rounds, Fields nearly knocked out Thompson. Thompson courageously remained on his feet throughout the bout, repeatedly trying to throw his signature right cross, though he usually missed. Fields blocked a number of Thompson's blows with his gloves and forearms, and stopped a few in mid-air. His best and most frequent blows came from left handed jabs and hooks. In the third, Thompson made a brief showing when he scored with a few vicious right crosses, but he failed to carry his momentum into the next round. The eighth was interrupted by a riot that spilled into the ring, and the fighting was more even in the last two rounds with both fighters exhausted. The tenth found Thompson trying to score a knockout but most of his blows were blocked by Fields, who kept the round even. Fields won decisively and was awarded seven of the ten rounds with only one to Thompson and two even