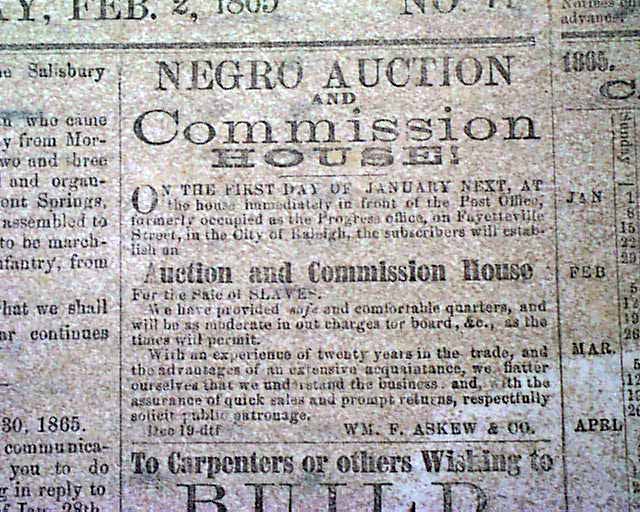 
THE DAILY PROGRESS, Raleigh, North Carolina, Feb. 2, 1865  Raleigh was one of the last major cities of the South to fall into the hands of Sherman, surrendering on April 13, 1865, just one day before Lincoln was assassinated. This rare Confederate title is from just over 2 months before surrendering.
The front page has a few war-related items but also has many advertisements and a: "Negro Auction and Commission House!" advertisement. Much of the war reporting is on the back page with: "War News--Sherman - The Army of Tennessee - Yankees on the Chowan" "Northern News" "Fight Between Yankee Congressmen" "Rosser's Cavalry Capture of Beverly" "Arrest of an Alleged Confederate Officer" "From Richmond" and more.
Complete as a single sheet newspaper which is typical for late-war issues from the South as most of the paper mills were in the North. Very nice condition.