Home > Back to Search Results > The Chesapeake and the Shannon...
Click image to enlarge 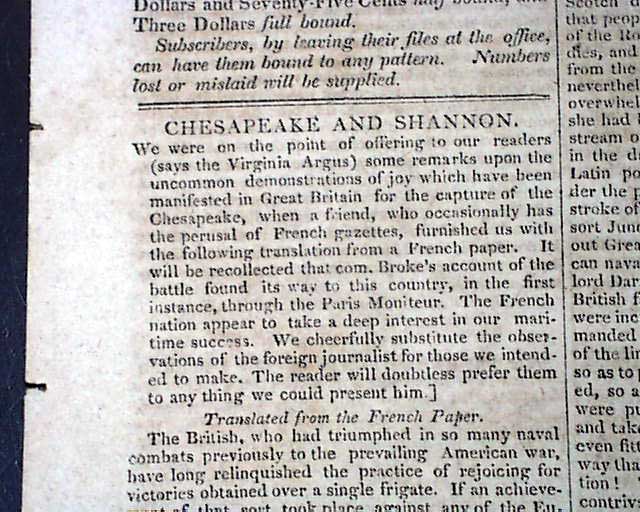 Most of the front page is taken up with a very historic report headed: "Chesapeake And Shannon" which is a French report of this significant naval battle. It begins: "The British, who had triumphed in so many naval combats previously to the prevailing American war, have long relinquished the practice of rejoicing for victories obtained over a single frigate..." with much more. Also on the ftpg: "General Orders of Debarkation, of March, and of Battle" which carries over to take half of pg. 2 as well.
Inside has: "...Letter from Com. Chauncey to the Sec. of the Navy" "Address of the Inhabitants of the Upper Province of Canada" "Latest From Our Armies" "British Naval Forces" "News from the Frigate Essex" "British Account of the Capture of Proctor's Army" and "Barbarities of the Enemy" among other items.
Four pages, 9 3/4 by 12 1/4 in., never-trimmed margins, various light water staining, generally good condition.