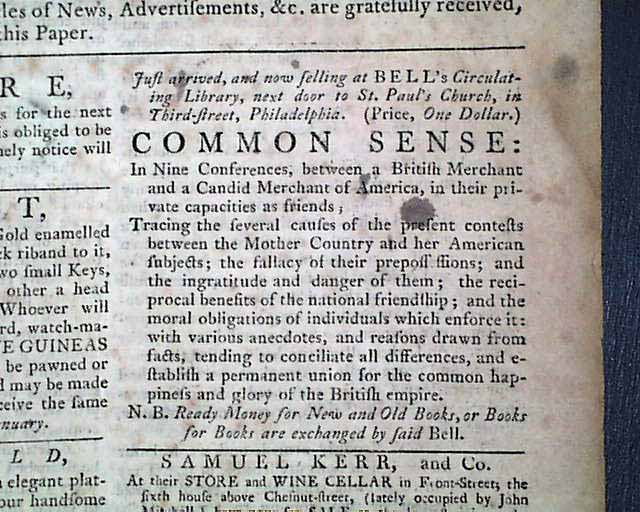 
THE PENNSYLVANIA LEDGER OR THE PHILADELPHIA MARKET-DAY ADVERTISER, January 31, 1778

This was a Tory newspaper published in Philadelphia when the British occupied the city. It began in 1775 and ended when the British evacuated the city in May of 1778. Not surprisingly, the masthead features an engraving of the Royal coat-of-arms.
The front page is filled with ads including one for the sale of "Common Sense" with descriptive text. Page 2 has the text of the King's speech to Parliament in which he expresses his decision to keep the number of forces in America at their current levels. Text includes: "...I can have...support of my parliament in this conjuncture when the continuance of the rebellion in North America demands our most serious attention...I am persuaded that you will see the necessity of preparing for such farther obstinacy of the rebels, may render expedient, I am, for that purpose, pursuing the proper measures for keeping my land forces complete to their present establishment; and if I should have occasion to increase them...I rely on your zeal & public spirit to enable me to make them good..." with more.
Page 2 has a half column letter concerning the naval establishment of England with comments on America including: "...and obstacles procrastinate the subduing the Americans immediately, we may turn our arms to a foreign war...And when all parties had satisfied the sentiment, and peace again taken place, we should find our refractory Colonies convinced that no government is equal to the British, or can, in like manner, protect them..." with more.
Complete in four pages, ink stains in the top quadrant do deter some, some foxing near the margins, otherwise fine. Not surprisingly, being a Tory newspaper the masthead features an engraving of the Royal coat-of-arms.