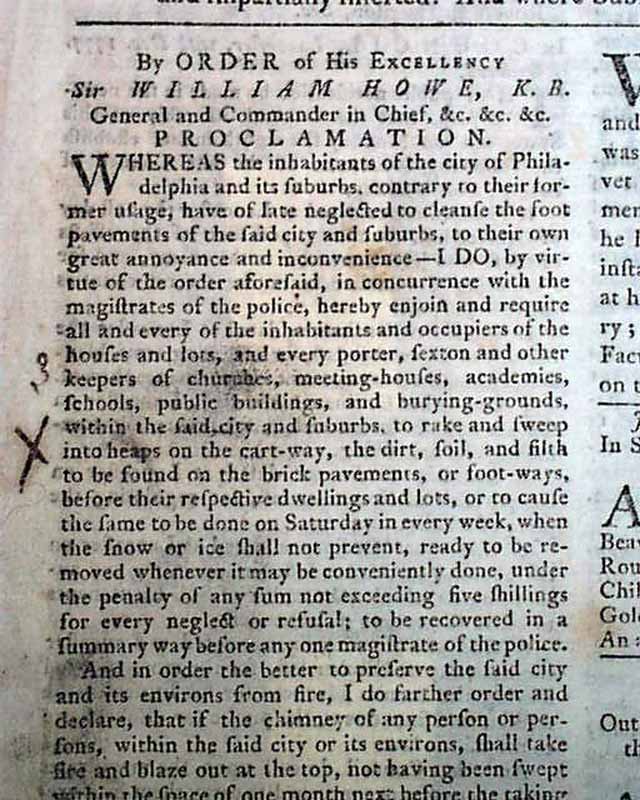 
THE PENNSYLVANIA LEDGER OR THE WEEKLY ADVERTISER, Philadelphia, Jan. 24, 1778

This was a Tory newspaper published in Philadelphia when the British occupied the city. It began in 1775 and ended when the British evacuated the city in May of 1778. Not surprisingly, the masthead features an engraving of the Royal coat-of-arms.
The front page begins with a half column "Proclamation" by William Howe, commander of British forces in America, concerning keeping the streets clean as well as chimneys to prevent fires.. Also another "Proclamation" by Howe about inhabitants not crossing the river to New Jersey (see). Page 2 has a letter from Paris signed in type by: B. Franklin and S. Deane, concerning an exchange of 200 British prisoners, asking: "...whether an exchange may be made with him for an equal number of American seaman seamen now prisoners in England...". This is followed by a related letter also signed in type by B. Franklin and S. Deane.
Also inside is a letter signed by John Beazeley concerning a naval encounter between the American ship Lexington and the British ship Alert. Another item notes: Last Thursday one Taylor, a spy, was hanged at Hurley, who was detected with a letter to Burgoyne which he had swallowed in a silver ball, but by the assistance of tartar emetic, he discharged the same."
The top of page 2 has a proclamation signed in type by: G. Washington, dated from Lancaster, concerning a deadline for threshing their grain. There is also: "A Proclamation" by Major General James Robertson, Commandant of New York, concerning ships in the harbor.
A pg. 3 items being: "The loss of this city and the river Delaware, we hear, have so much disconcerted Congress that they have been obliged to adjourn themselves to consult their constituents...". Also a: "Proclamation" by Wm. Howe concerning the sale of food within Philadelphia.
Four pages, minor foxing, numeric notations in margins next to ads (this was the editor's copy), minor archival mend at the inside spine, generally nice.