Home > Back to Search Results > Little Rock Nine in 1957...
Click image to enlarge 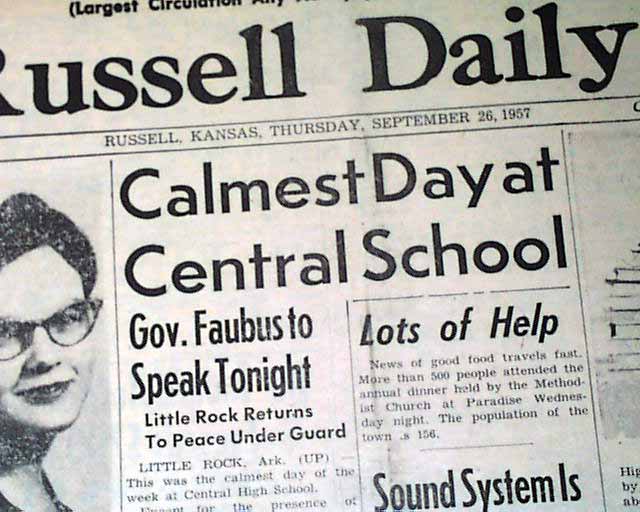 The top of the front page has a two column headline: "Calmest Day at Central School" with subheads. (see)

wikipedia notes:  The Little Rock Nine were a group of African-American students who were enrolled in Little Rock Central High School in 1957. The ensuing Little Rock Crisis, in which the students were initially prevented from entering the racially segregated school by Arkansas Governor Orval Faubus, and then attended after the intervention of President Eisenhower, is considered to be one of the most important events in the African-American Civil Rights Movement.

Woodrow Mann, the Mayor of Little Rock, asked President Eisenhower to send federal troops to enforce integration and protect the nine students. On September 24, the President ordered the 101st Airborne Division of the United States Army to Little Rock and federalized the entire 10,000 member Arkansas National Guard, taking it out of the hands of Governor Faubus. The 101st took positions immediately, and the nine students successfully entered the school on the next day, Wednesday, September 25, 1957.