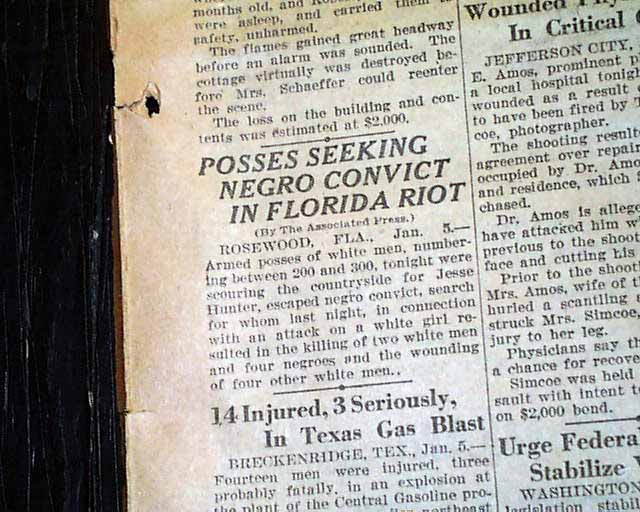 The front page has a brief report under the one column heading: "Posses Seeking Negro Convict In Florida Riot" (see)
Also of interest with a one column heading: "Pharaoh Tomb Yields Marvels Of Ancient Art" which is coverage on the recent opening of King Tutankhamun's tomb.
Fourteen pages, light toning, a little margin wear, should be handled with care.

wikipedia notes: Rosewood was a small community of nearly 350 people, mostly black, in Levy County in central Florida, USA. Today, it is remembered for the Rosewood Massacre of January 1923, in which over several days, white mobs attacked and killed blacks, and burned most of the buildings in the settlement, which was abandoned by residents during the attacks and was not reoccupied. It had been a "whistle stop" on the Seaboard Air Line Railway, located on the north side of State Road 24 half a mile east of the intersection with Levy County Road 345. After reopening of history of the incident in the late 20th century, publicity was given to the terrible events through a book, film and commissioned report to the Florida legislature. A bill was passed to compensate survivors and descendants. The site of the former village has been designated a Florida Heritage Landmark.