Home > Back to Search Results > Sale of world's most rare postage stamp...
Click image to enlarge 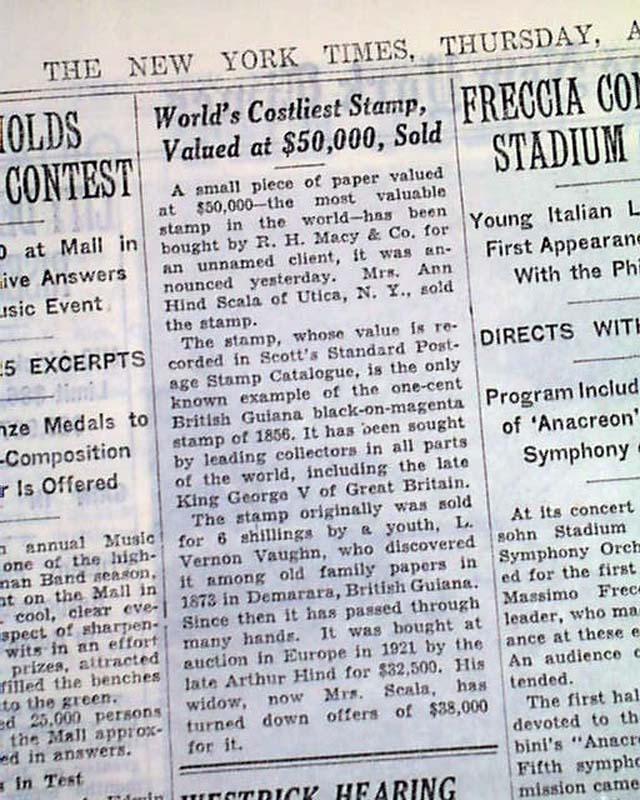 Page 22 contains a somewhat inconspicuous report of the most recent sale of the world's most valuable stamp, the one cent magenta British Guiana stamp.  The report--see the photos for the full text--gives some details as are substantiated by further details on this stamp provided by Wikipedia: "The British Guiana 1 cent magenta is regarded by many as the world's most famous stamp.It was issued in limited numbers in British Guiana (now Guyana) in 1856, and only one specimen is now known to exist. The 1 cent magenta was part of a series of three definitive stamps issued in that year and was intended for use on local newspapers. The other two stamps, a 4 cent magenta and 4 cent blue, were intended for letter postage. The issue came through mischance. An anticipated delivery of stamps never arrived by ship in 1856, so the local postmaster authorized a printer, Joseph Baum and William Dallas, who were the publishers of the Official Gazette newspaper in Georgetown, to print out an emergency issue of three stamps. Dalton gave some specifications about the design, but the printer chose to add a ship image of his own design on the stamp series. The postmaster was not pleased with the end result, and as a safeguard against forgery ordered that all correspondence bearing the stamps be autographed by the post office clerks.

It was discovered in 1873, by 12-year-old Scottish schoolboy Vernon Vaughan in the Guyanese town of Demerara, amongst his uncle's letters. There was no record of it in his stamp catalog, so he sold it some weeks later for a few shillings to a local dealer, N.R. McKinnon. After that, the price escalated. It was bought by a succession of collectors before being bought by Philippe la Rénotière von Ferrary in the 1880s for US$750. His massive stamp collection was willed to a Berlin museum. Following Ferrary's death in 1917, the entire collection was taken by France as war reparations following the end of World War I. Arthur Hind, of Utica, New York bought it during the series of fourteen auctions in 1922 for over $36,000 (reportedly outbidding three kings, including King George V). Arthur Hind died in 1933 and left his stamp-collection as a part of his estate. His widow, however, claimed that the one-cent British Guiana stamp had been given to her by her husband. The court upheld her claim and in 1940 the stamp was sold to Frederick Small, an Australian living in Ft. Lauderdale, Florida, for a price ranging between $40,000 to $75,000.
In 1970, a syndicate of Pennsylvanian investors, headed by Irwin Weinberg, purchased the stamp for $280,000 and spent much of the decade exhibiting the stamp in a worldwide tour. John E. du Pont bought it for $935,000 in 1980. Today it is believed to be locked away in a bank vault, while its owner serves a 30-year sentence for murder."
Other news, sports and advertisements of the day. Complete in 40 pages, this is the rare rag edition that was produced on very high quality newsprint, with a high percentage of cotton & linen content, allowing the issues to remain very white & sturdy into the present. Given the subscription cost, libraries & institutions rather than individuals were the primary subscribers of these high-quality editions. Very nice condition.