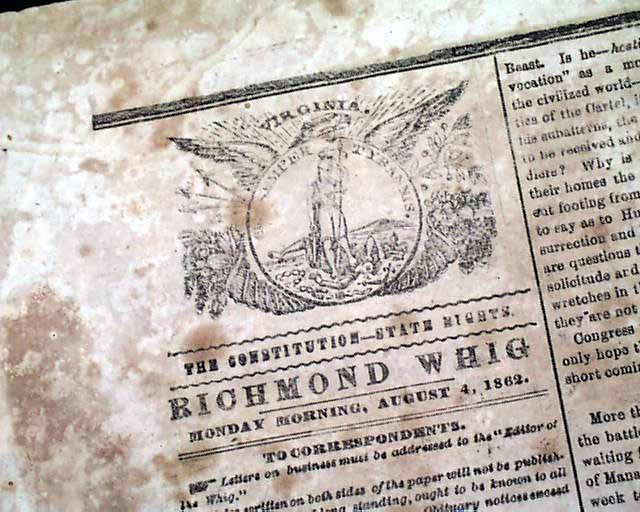 * Rebel newspaper from the Confederate capital

Not only a newspaper from the Confederacy, but from its capital as well. The ftpg. has an editorial piece headed: "Retaliation" and other items headed: "Waiting" "The Negro Allies" "The :Mississippi River" "The Telegraphic Embroglio" "Smith O'Brien on the American War" and a bit more, but the two key front page items are the 1 1/2 column report headed: "Graphic Description of the Battle of Gaines' Mill" which has much detail; and an item headed: "From The President To Gen. Lee" which is signed in type: Jefferson Davis, which concerns an exchange of prisoners of war.
The back page has several more war-related items including: "Yankee Indendiarism" "Movement in Favor of the Jews in Russia" "A Yankee Frigate Sunk" "Butler's Delta" "Col. Morgan's Appeal to Kentuckians" "The Late Attack of the Enemy's Fleet" "The Gunboat Fight at Vicksburg" "Sale of Negroes" and a few other items.
Complete as a single sheet issue with a one column masthead (typical from the Confederacy), scattered foxing with some wear at the folds with a few minor archival mends at one fold juncture.