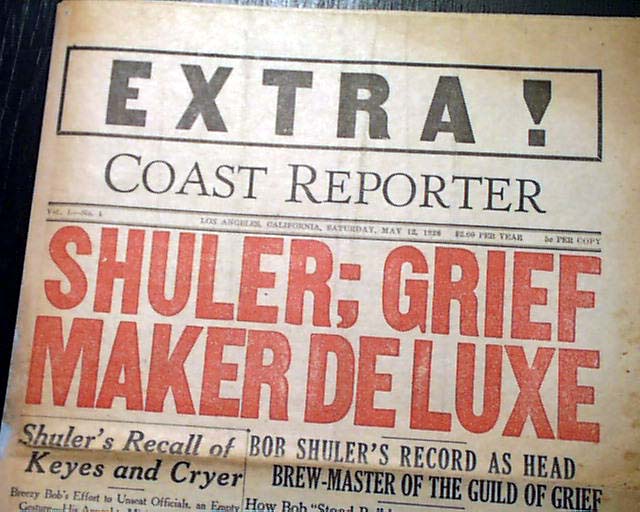 This is the vol. 1 number 1 issue of a seemingly odd-ball weekly newspaper from Los Angeles, mostly dealing with political issues. This issue deals almost exclusively being very critical of famed Robert Shuler, also known as "Fighting Bob".
He was an American evangelist and political figure. His radio broadcasts from his Southern Methodist church in Los Angeles, California, during the 1920s and early 1930s attracted a large audience and also drew controversy with his attacks on politicians and police officials. In 1931, the Federal Radio Commission revoked Shuler's broadcast license due to his outspoken views.
One article begins: "Is Bob Shuler a servant of God? Well, figure that out for yourself. But according to the writer's opinion the above mentioned is a publicity seeker, a scandal monger and a poor, unfortunate who would rather dish dirt than the word of God..." and much more.
This title is not listed in Gregory's Union List of American Newspapers.
Eight pages, tabloid size, archivally rejoined at the spine and discrete archival mends at several folds, otherwise good.