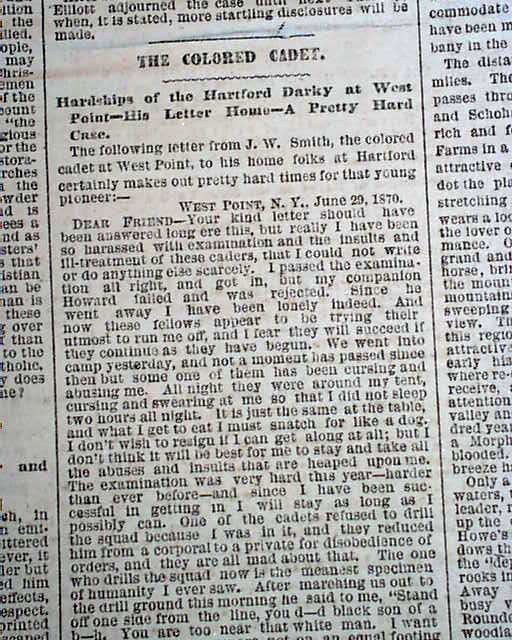 Page 8 has a letter from James Webster Smith headed: "The Colored Cadet" "Hardships of the Hartford Darky at West Point--His Letter Home--A Pretty Hard Case" This letter is signed in type: J. W. Smith. Henry Ossian Flipper is more known because he was the first African American to actually graduate from West Point 7 years later.
Other news of the day. Complete with all 12 pages, a little irregular along the spine, generally good.

wikipedia notes: James Webster Smith (June 1850 - November 30, 1876) was an American professor and a cadet at the United States Military Academy. A former slave, Smith became a scholar and is recognized as the first black person appointed to a cadetship at West Point. His tenure at the academy, from 1870 to 1874, was fraught with racial prejudice and ended with Smith's formal dismissal a year before completing his studies. Resented by his fellow classmates, Smith lived an isolated lifestyle at West Point, enduring harassment and vandalism. His squadmates only drilled with Smith under threats of demotion or court martial.

The murder of Jennie Cramer... The ar...