Home > Back to Search Results > Revolutionary War... The "Tories" at Newport...
Click image to enlarge 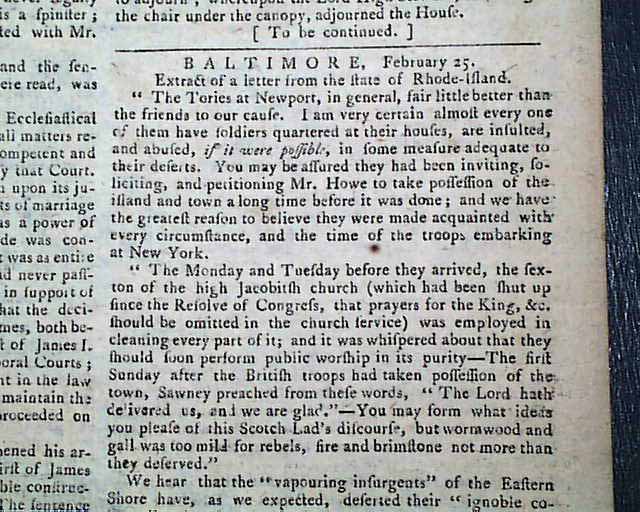 Revolutionary War... The "Tories" at Newport...

The front page is entirely taken up with ads including one for the sale of a plantation in Berks County, Penna. All of page 2 & half of page 3 are taken up with: "The Trial of the Dutchess of Kingston".
Page 3 has a report concerning the war, including: "The Tories at Newport, in general, fair little better than the friends to our cause. I am very certain almost every one of them have soldiers quartered at their houses, are insulted, and abused...they had been inviting, soliciting & petitioning Mr. Howe to take possession of the island..." and a bit further on is: "...since the Resolve of Congress that prayers for the King should be omitted in the church service...the first Sunday after the British troops had taken possession of the town, Sawney preached from these words, 'The Lord hath delivered us, and we are glad..." and a bit more on war-related items.
The back page has a report with a Philadelphia dateline which includes: "On the 23rd a body of 2500 of the British troops with six pieces of cannon were attacked & repulsed near Woodbridge by a party of 700 Americans under the command of Gen. Maxwell. The enemy had 40 killed & 80 wounded...It is supposed the enemy were those that lately left Rhode Island & were going to reinforce the army at Brunswick. We hear from Ticonderoga that on the 13th a number of Indians & Canadians advancing within about 30 miles of the fort, they were attacked by our advanced guard...it does not appear that any of the British troops were with them..." with more. The balance of the back page is taken up with ads.
Complete in 4 pages, a bit of foxing, 8 by 10 in, generally inches, very nice condition.