Home > Back to Search Results > Period report of the Battle of the Kegs...
Click image to enlarge 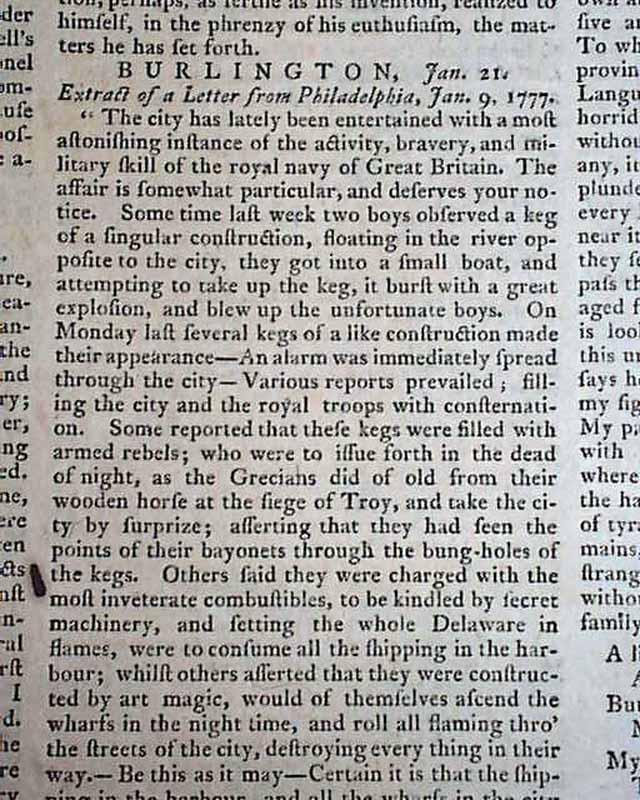 Period report of the Battle of the Kegs...


THE PENNSYLVANIA LEDGER OR THE WEEKLY ADVERTISER, Philadelphia, Feb. 11, 1778

This was a Tory newspaper published in Philadelphia when the British occupied the city. It began in 1775 and ended when the British evacuated the city in May of 1778. Not surprisingly, the masthead features an engraving of the Royal coat-of-arms.
The front page is entirely taken up with ads & notices, the very first being: "By Order of his Excellency the Commander in Chief" to all deserters from the American army: "...who wish to go to Europe are to give in their names & places of abode...in order that a passage free from expence may be provided for them."
Page 2 has almost a full column taken up with controversies over the treatment of prisoners on both sides, including mention of George Washington with: "...At the same time I acquainted General Washington that if he chose to treat the three first who were British officers as prisoners of war, I doubted not the Council of Safety would be satisfied. General Washington has since informed me that he intends to consider them as such..." with more. Page 2 also has a letter which begins: "The city has lately been entertained with a most astonishing instance of the activity, bravery, and military skill of the royal navy of Great Britain...". This is actually a terrific & timely report of what is known as the "Battle of the Kegs". Interesting that within the article it is stated: "...In a word, Monday the 5th of January 1778 must ever be distinguished in history for the memorable BATTLE OF THE KEGS."
Another pg. 2 item includes: "The number of deserters from the rebel army, the number of persons that have fled from the unmerciful tyranny & oppression of the rebel leaders & flocked to this town for refuge, have made it like a mere bee hive...".
Four pages, numeric notations next to ads (this was the editor's copy), very nice condition.