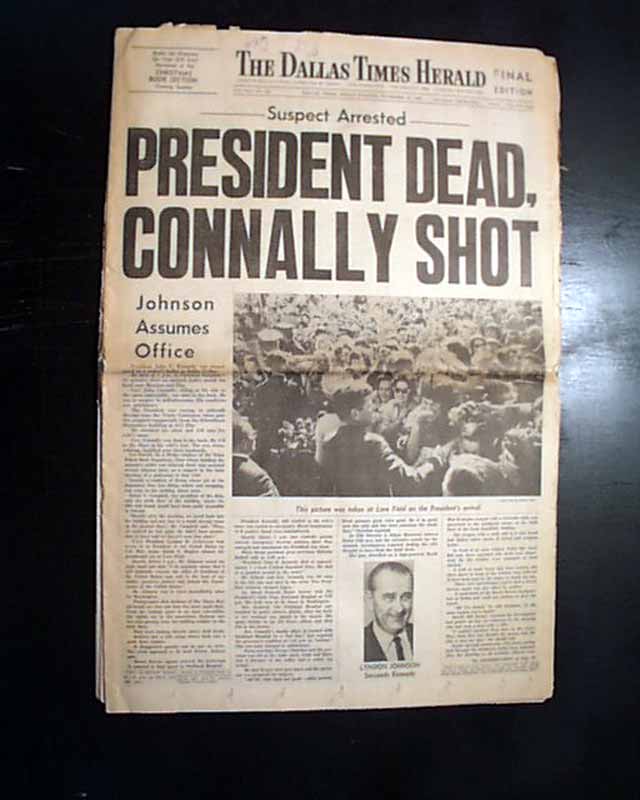 
THE DALLAS TIMES HERALD, Texas, November 22, 1963  Serious collectors always try to obtain historic newspapers from the city where the event happened. For JFK's assassination that would be a Dallas newspaper.
Of the two newspapers which published in Dallas in 1963 only the TIMES HERALD reported the assassination on the same day it happened--November 22--and only in their 2nd and 3rd editions. The MORNING NEWS, being a morning newspaper, reported the assassination in its November 23 issue.
This is the "Final Edition" with the very large & dramatic banner headline reading: "PRESIDENT DEAD, CONNALLY SHOT" with a subhead: "Johnson Assumes Office". There is also a large ftpg. photo captioned: "This picture was taken at Love Field on the President's arrival." The balance of the ftpg. is taken up with assassination reports which carry over to inside pages.
Of curious interest--and only to be found in a Dallas newspaper--are two inconspicuous advertisements to be found on facing pages inside. One is for the 'Texas" movie theater, where Lee Harvey Oswald was arrested (trivia: he was watching the movie "War Is Hell" and the facing page has an advertisement for the "Carousel", the night club owned & operated by Jack Ruby.
This is a rare complete issue with all 3 sections and 60 pages. We seldom find as such. Minor wear at the margins, some light toning, and two small inked numerals at the very top, an inside pages has various tears to the top half. Generally good condition.