Home > Back to Search Results > Barbarities of the enemy... Recapture of Detroit...
Click image to enlarge 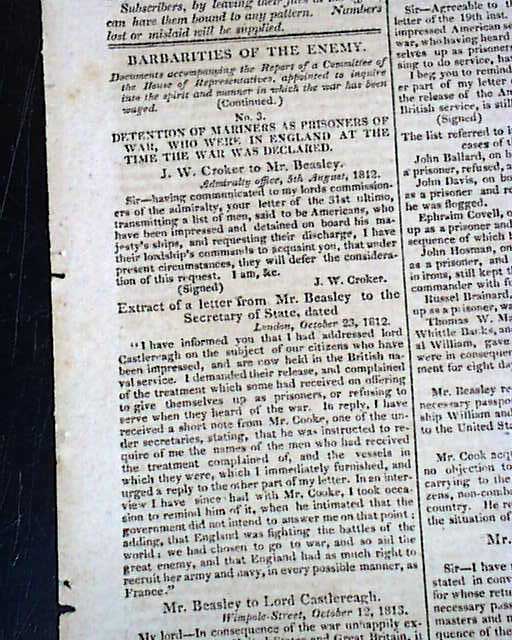 Barbarities of the enemy... Recapture of Detroit...


THE WAR, New York, Nov. 9, 1813  The front page is entirely taken up with various documents which fall under the heading: "Barbarities of the Enemy" with a subhead reading: "Detention of Mariners as Prisoners of War, who were in England at the Time the War was Declared".
Pages 2 & 3 are almost entirely taken up with some nice reports on the War of 1812, with heads including: "Indian News", plus "Col. Clark's Expedition" and "A Proclamation" signed in type by: William H. Harrison, which begins: "The enemy having been driven from the territory of Michigan, & a part of the army under my command having taken possession of it..." with more. Also: "Recapture of Detroit", plus "Arrival of Commodore Perry and General Harrison" and "Movements of Gen. Harrison" and even more.
Even the back page is almost entirely taken up with war news, including: "From Sandy Hook" and "Our Late Victories" which begins: "The victories of com. Perry and gen. Harrison, which have resulted in the entire prostration of the enemy's power in the territory of Michigan & in the whole of the northwestern part of Canada..." with much more, taking over a full column.
Four pages, 9 3/4 by 12 1/4 in., never-trimmed margins, great condition.