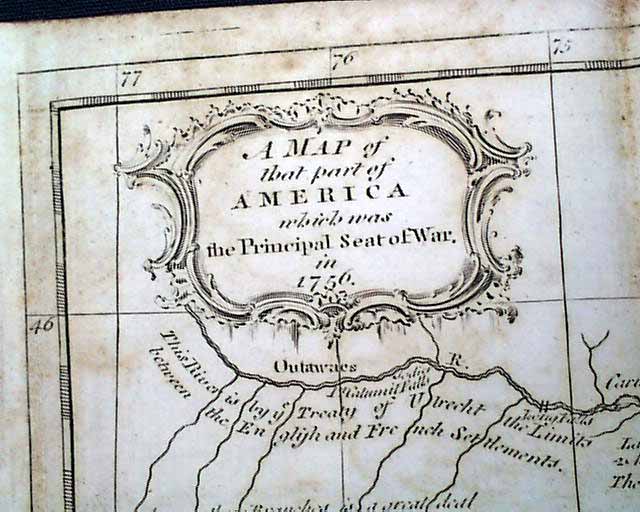 Item # 670988
THE GENTLEMAN'S MAGAZINE, London, February, 1757  Among the inside pages is a quite lengthy & detailed article titled: "An Historical Account of American Affairs during the Two last years, with a particular journal of the Siege & Surrender of Oswego" with this text taking over six pages (see photos for portions). This text also includes a report headed "Account of the Surrender of Fort Granville" & "Col. Armstrong's Success against Kittanning".
Included as well is a very nice half page map headed: "Plan of the Forts Ontario and Oswego with Part of the River Onondago and Lake Ontario", including a key to the noted points on the map (see photos).
The more significant item in this issue is the great and somewhat large foldout map of the French and Indian War titled in the decorative cartouche: "A Map of that Part of America Which was the Principal Seat of War in 1756." which shows most of New England and more, from Nova Scotia to eastern Ontario, to Massachusetts to Fort Oswego to the northern portion of Pennsylvania and much in between (see photos). This foldout map measures 9 by 13 inches, has some fold creases and scattered, light foxing.
Complete in 46 pages, 5 by 8 inches, full title/contents page with an engraving of St. John's Gate. Very nice condition.